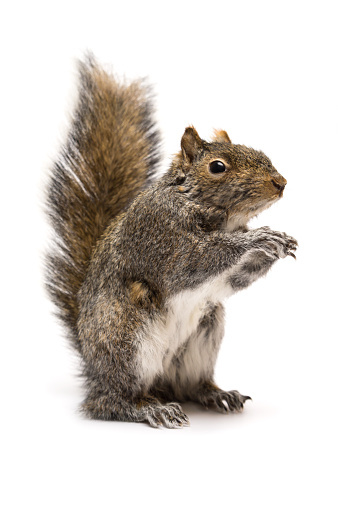 Posted on 18th April 2018 at 09:10
Squirrel breeding season is well underway and we're getting numerous callouts to deal with these animals who can cause considerable damage. What does it mean when you see squirrels chasing each other around and around the tree trunk? Read on for more information.
Squirrels playing tag around the trunk of a tree in the garden is often more than these cheeky creatures having fun. Squirrels will do this as part of territorial disputes where the dominate animal catches the subordinate to show them who’s boss. As well as establishing the pecking order, young squirrels like all animals learn through play and they will chase for much more playful reasons as they develop coordination, strength, and skills...and perhaps just for the fun of it all.
Aggression and chasing is an important way to establish the ranking members of the population which is important when it comes to reproduction. Dominant squirrels will chase down and nip their subordinate counterparts.
If you’ve got squirrels playing tag in the garden either in late winter or early spring this isn’t about territory or dominance, its about mating rights. The female squirrel will only be receptive to mating for a short period; possibly as short as a few hours. Males will detect the females hormone changes and begin hanging around on the periphery of her territory waiting for their chance.
Having established who’s boss the dominant male will begin the first chase, in the event that he’s too keen and she is not ready to mate a kind of stalemate will be reached and she may even hide away from his advances, hide and seek for squirrels. Meanwhile less dominant squirrels may have worked out her hiding place and will sit in wait for their chance.
She will mate with several males over the period where she is receptive and then look for a place to build a drey and give birth. This is where the conflict between squirrel and man comes; squirrels in your loft will scrape all the insulation off the plasterboard and into the soffet and fascia box where she will crush this down to make a nice warm nest.
They will also target stored items in the loft and we’ve seen some examples of serious damage to goods kept in the loft. They will also gnaw and if it’s an electrical cable they’re gnawing on then you may be in line for a hefty bill for repairs. If you have an problem with squirrels in the loft of your property its better to get early treatment, the longer that you leave it the worse the damage done. All Aspects Pest Control Ltd provides a service to deal with squirrels in Reading, Woodley, Wokingham, Bracknell and throughout Berkshire.
All our treatments work on trapping followed by hard physical proofing to stop a reoccurrence in the future. Squirrels are a pest and poison should not be used to eradicate them as these have been withdrawn from legal use.
Tagged as: Squirrels
Share this post: