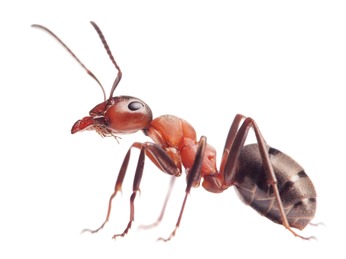 Posted on 14th February 2017 at 18:06
At this time of year we expect to be dealing with winter pests; its 2*C outside and two call-outs in one week for ants. Not usual ants but exotic invaders from North Africa, its the Mummy's Revenge - Pharaoh ants running riot all over the kitchen.
We deal with all insect pests, not just the usual problem pests like wasps but relatively rare foreign insects that are migrating into homes and businesses all over Wokingham, Reading, Bracknell and Maidenhead.
We are certainly dealing with a lot of the usual winter pests like squirrels, rats and mice; currently the demand is high for squirrel treatments in areas of Wokingham, Binfield and Burghfield where the grey squirrels are gnawing their way into lofts and void spaces. Squirrels have two breeding seasons and the first one is just about to start meaning that female squirrels (known as doe's - the male is a buck) are looking to set up to give birth to the kittens (young squirrels) in March and April.
Looking at the squirrels we've already caught in Wokingham, its seems that the weather has warmed up and so has the breeding; one female was obviously pregnant and with litter sizes ranging from three to seven young twice in a year, you can see why its so busy.
True for this time of year we're also experiencing heavy demands for rat control throughout Reading and Wokingham, the cold weather along with reduced food sources drives rodents into our warm homes to seek shelter and any food that's within a whiskers' breadth! Often rats gain access into a property via a break in the outside wall that leads into the internal cavity between the walls, from there they will follow waste water pipe runs that cut through into kitchens and bathrooms.
But recently we've had a couple of unusual ant treatments; normally you'd expect ant problems in the summer but these have been with an exotic species of ant; the Pharaoh ant which comes from North Africa. These ants are now at home throughout Berkshire and have over the last few years become a serious pest. These ants are really small, no more than a millimetre and a half in length and so successful they have managed to spread all over the world.
The unique ability of these ants is that they can adapt to their environment so if they become stressed through lack of food or insecticide attack, the worker ants will grab a supply of the colonies egg's and 'bud off' on their own. The workers will then manipulate the developing egg's to produce a new Queen who will then go onto establish a 'branch' colony.
These colonies may each contain thousands of ants all with their own Queens and they have the ability to recognise their 'siblings' meaning that they will work in harmony with one another building super colonies that can stretch for miles. As an exotic species they do require consistently warm environments in which to live; environments like offices, shops and hospitals. These types of buildings provide the ants with moisture and food; the ants themselves are true omnivores attracted to all foodstuffs; sweet substances, fatty foods and other insect species. We will often find them in the kitchen and bathrooms of a property.
These are extremely undesirable pests to have around the house, their small size means that they can just about get anywhere and they have even been known to squeeze through the threads of unopened glass jars to get at the contents within. They pose a serious health hazard in hospitals as they will invade sterile areas and have a nasty attraction to putrefying flesh meaning that will be found on sores and unhealed wounds.
Another unique ability of Pharaoh ants is that they use a "negative" pheromone as a chemical messenger; other species use a positive pheromone to attract ants to a potential food source. What this means to us as pest controllers is that if someone is attempting to treat Pharaoh ants with poisonous insecticides they will use this negative pheromone to warn others away and just 'bud' off and form new colonies elsewhere; the problem gets worse the more you spray!
Pharaoh ants are best treated with a undetectable slow acting poison that contains a growth hormone which prevents the larvae from becoming adults, meaning that the colony slowly but surely declines and dies out over a period of time.
If you have a problem with any insect pest, we can deal with that and leave you pest free.
Tagged as: Ants
Share this post: