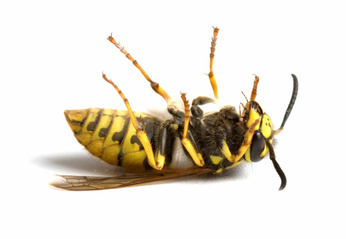 Wasps in Reading; its that time of year again

Posted on 7th June 2018 at 08:42
Summers here and so are the wasps; callouts rising to treat wasp nests in Reading and across Berkshire, these insects deliver a painful sting.
Well we’re well into what we in the pest control industry call “Wasp season” and yep, it means we’re all about wasps from here on well into the end of September.
Most people have a dread of wasps, bee’s and hornets; usually as a result from a painful experience in the past. Occasionally we’ll meet those individuals (like my wife) who are actually terrified of buzzing insects and hate the summer months for the terror that these insects inflict.
Hornets sting as a defensive measure, for us as pest controllers we can treat these insects very easily due to their docile nature; however its best to avoid close contact to the nest location as these insects pack a powerful punch of toxins, around 2 to 3 metres from the nest is considered the danger area.
The hornet carries 50ml of an toxin that contains an additional chemical to the wasp, called Acetylcholine, this chemical is also found in our brains and used to carry pain signals from the nerves, so hornet stings will be extremely painful!
Wasps are seen as generally aggressive a nuisance to be avoided; I wouldn’t disagree with that however they are important pest controllers in their own right as these eat only insects; caterpillars, flies, other wasps and spiders.
When wasps sting they release a pheromone that signals to all the other wasps that they’re under attack and need help, meaning that if you’re near the wasp nest things are going to get hairy – so move away from the area quickly.
Pest controllers wear protective suits for a good reason and from experience there are two types of wasp – the common wasp and the European wasp. The European or German wasp as its sometimes referred to is extremely aggressive and these need to be treated with caution.
Wasps carry about 15ml of venom; so a third of a hornets load. However with wasps it’s the sheer numbers coming out of the nest which can be daunting, a full size nest at the peak of the season may contain up to 15,000 wasps – so care is needed when treating these!
As ethical pest controllers we don’t usually treat honey bee’s as we’ll either try to get a beekeeper out to collect them or if they’re in a remote place we advise the homeowner and try and see if they can be left in situ. They will probably move off on their own accord and as these are important to our wellbeing we’d prefer not to treat.
Bee venom is different to that of wasps and hornets as where theirs is alkaline; the honey bee’s venom is acidic. When a bee stings it leaves a barbed stinger in the skin of the victim meaning that venom keeps on getting pumped; 90% of the venom is released within 20 seconds, so if you’re stung by a honeybee pull the stinger out immediately.
Bee’s also release an alarm pheromones when stinging from the Koschevnikov gland, this acts a security system for the nest causing the other bee’s to become aggressive; flying faster and buzzing louder. They are seeking threats to sting and that maybe you if you stay in the location so move away quickly.
No matter what pest you’ve got we can get a fully trained technician out to you within 24 hours and we’re experts at wasp and hornet control in Reading, Wokingham, Maidenhead and Bracknell.
All Aspects Pest Control Ltd is a family based company where we treat our customers as our priority.
Tagged as: Wasps, bee's and hornets
Share this post: