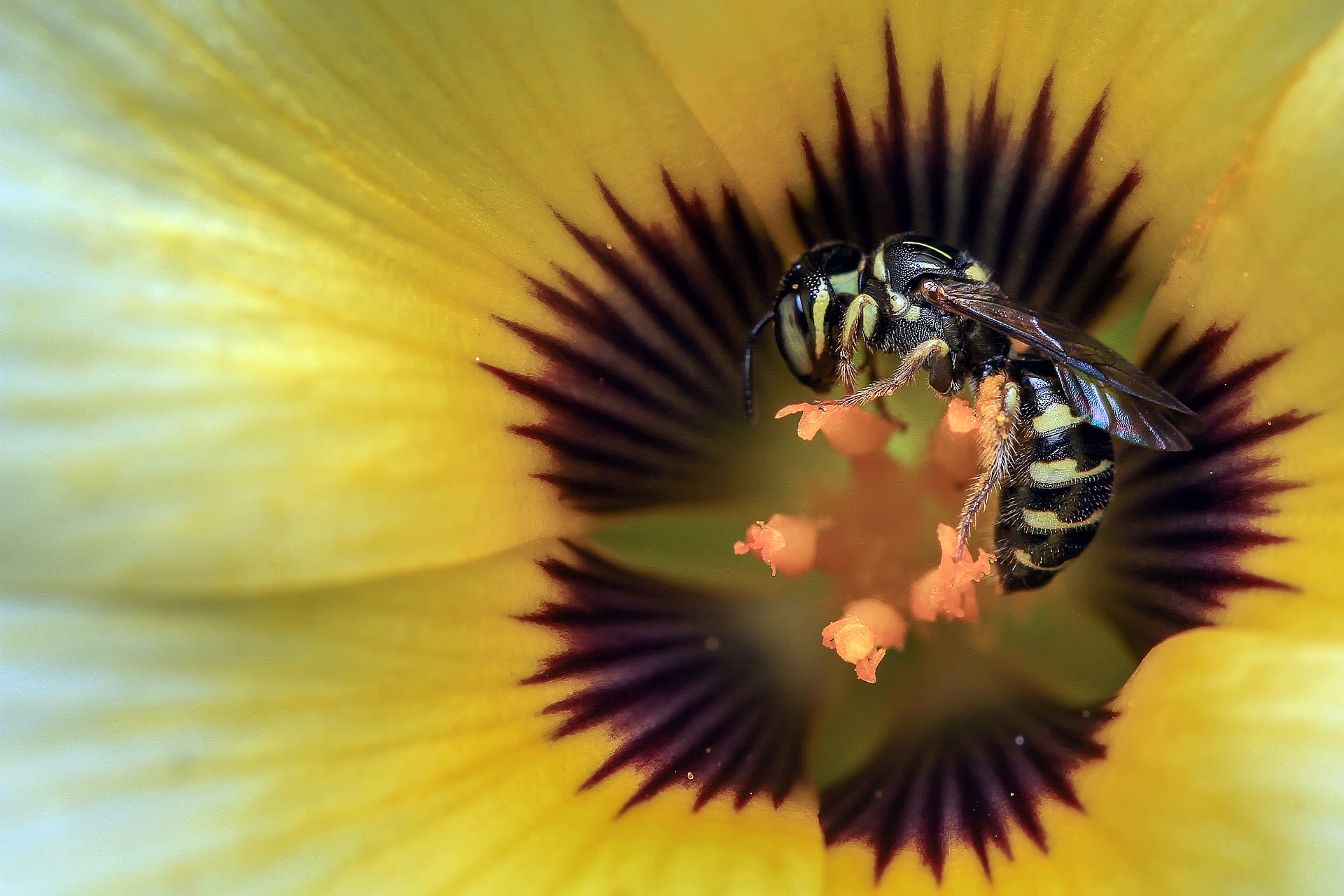 Posted on 19th February 2020 at 17:52
To fully understand insects we have to know that they are given a classification and belong to different Orders; think of dog breeds; not all dogs are the same but certain types are associated with one another such as labradors and retrievers. Wasps, bees and hornets all belong to the insect Order Hymenoptera: the word is derived from Greek which describes a membrane – Hymen and Ptera; wings. Insects of this order all have two pairs of wings and Hymenoptera covers the group of highly specialised insects that often associate in large colonies with a complex social organisation.
So its understandable why ants are included within this Order along with the wasps, bees and sawflies. Insects within this order will generally have two pairs of slender wings and an abdomen that narrows around the waist – ants have wings, well, flying ants do.
Pub quiz fact - In the order of hymenoptera, males develop from unfertilised eggs whilst the females all come from fertilised ones, this way the Queen can regulate the sex ratio of her offspring.
To help matters out, within the order we then have two sub groups and we have one for wasp like groups and one for bee like groups; when you look at wasps and ants they conform to the same shape whilst bees and sawflies do not.
Most people recognize wasps as the typical yellow and black flying insect – after all a wasp is a wasp. The largest sub-order is Vespidae and these are known as true wasps, these are again divided into two subfamilies in the UK – the social wasps and mason wasps. Social wasps are sometimes called paper wasps because they construct a nest from wood pulp which we can sometimes see hanging in lofts and hedges around the area. We have two species of Mason wasps; Symmorphus crassicornis and Ancistrocerus parietum, both of these wasps live a solitary lifestyle building individual nests with no workers, the nest is made from clay and this is why they are often called Potter wasps.
Social wasps are either long headed or short headed – the short headed wasps are all from the Vespa family are the Common wasp (Vespula vulgaris) and the German wasp (Vespula germanica): these are the type that will usually be the most aggressive, its appreciated that all wasps will sting to defend their nest but these two are extremely aggressive with the German wasp being notorious for chasing people. The Common wasp builds a cream coloured nest usually within a void like a loft and numbers of worker wasps can reach into the thousands, whilst the grey paper nest of the German wasps will be found in hedgerows and shrubs. There is another member of the Vespa family: the Red wasp (Vespula rufa) and this is amongst the easiest going of all the wasp species and will only sting if provoked.
Pub quiz fact – the Piaggio scooter is called the Vespa which is from the Italian word for wasp; not for its sound it makes but due to its radical design: designed by Corradino D’Ascanio who couldn’t stand motorbikes, he gave it a rear engine along a flat front plate to protect the rider from dirt. This design gives the bike its narrow waist, just like a wasp.
The long headed wasps are in the family Dolichovespula and although able to inflict a painful sting these wasps often shy away from us and in the case of the Median wasp (Dolichovespula media) these are quite timid, flap your hands at them and they will fly away. A recent new arrival in the UK, the Saxon wasp (Dolichovespula saxonica) can be a problem as these wasps finish early in the season and we will often encounter huge areas swathed in directionless wasps as the Queen has died and they have abandoned the nest. Another common long headed wasp found in woodland are Tree wasps (Dolichovespula Sylvestris), this wasp can be identified by a solid yellow face with a small central black dot.
One wasp that is yet to arrive at our shores but will not be far away (if its not here already) is the Cuckoo wasp (Dolichovespula adulterine), these prey on the Saxon wasp where the Queen Cuckoo wasp sneaks into the nest of the Saxon wasp, kills the rival Queen then uses the Saxon workers to bring up her brood.
An even more recent arrival to the UK is the European Paper wasp (Polistes dominula) which live in small communities and have a weak sting so these present much less of a problem to us as a pest, these have been found in Kent so it will be interesting to see their spread across the country.
When it comes to hornets we only have a single species of hornet – the European hornet (Vespa crabro), a large and extremely loud insect these demand respect although they are quite calm and will only sting if you get near the nest or if you stand in the insects flight path, stay to one side and you’re quite safe.
There is a lot or press coverage regarding the invasive species of hornet known as the Asian hornet (Vespa velutina), this arrived in France back in 2004 where it has decimated honeybee colonies and resulted in some fatalities. The Asian hornet has been spotted in the Channel Islands and in southern counties, they commonly build nests high in the tree canopy and a good time to look out for these is when the leaves drop revealing round ‘paper lantern’ style nests.
Common wasp
Vespula vulgaris
Easy to identify with the anchor shape on its face; these wasps will be active early in the morning when they are out in force to find food for the larvae. 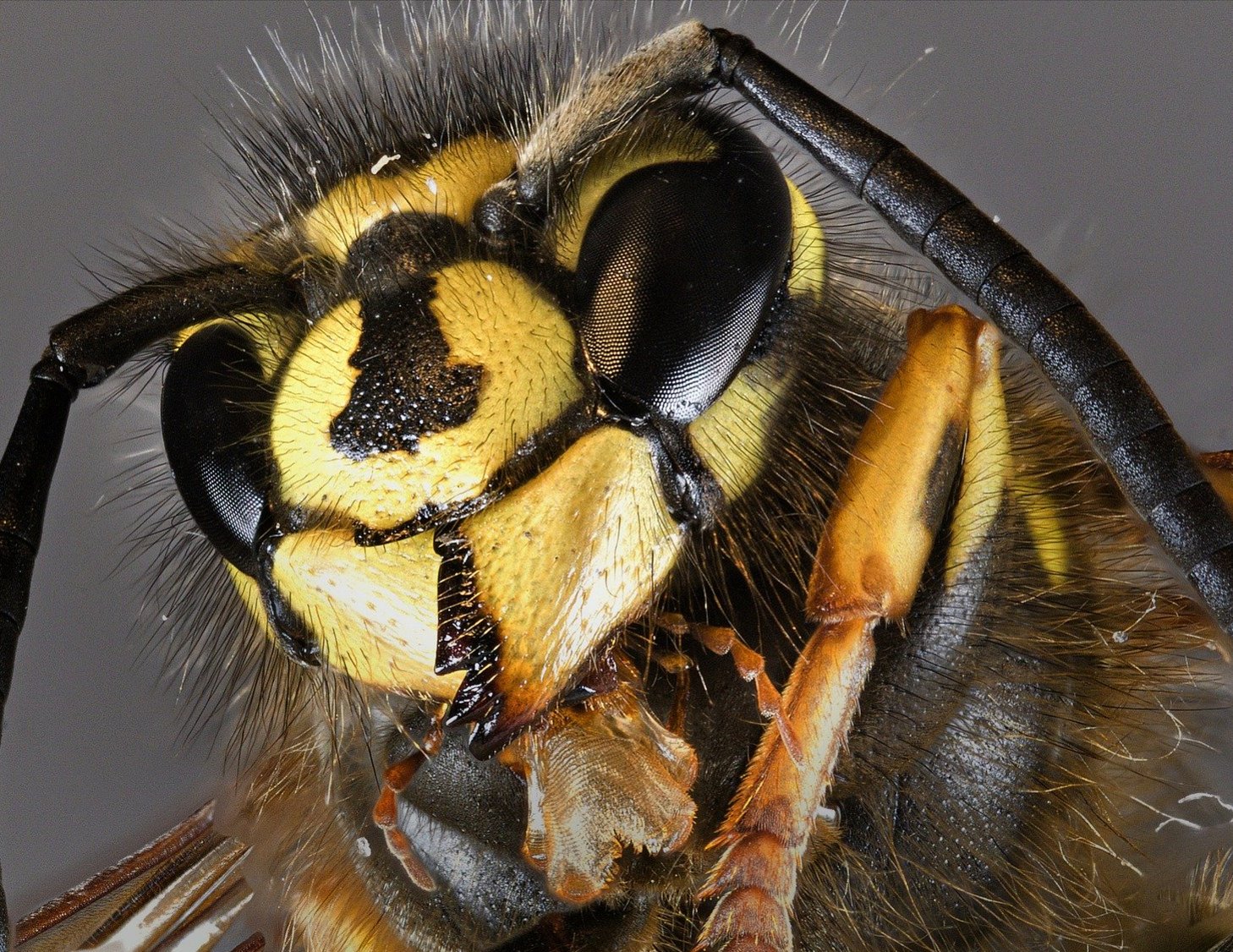 German wasp
Vespula germanica
The most aggressive of the wasp species, these build a grey coloured nest and will often do this inside a hedge or large shrub, three black spots on the face are how you identify these plus the fact that they're chasing you down the garden. 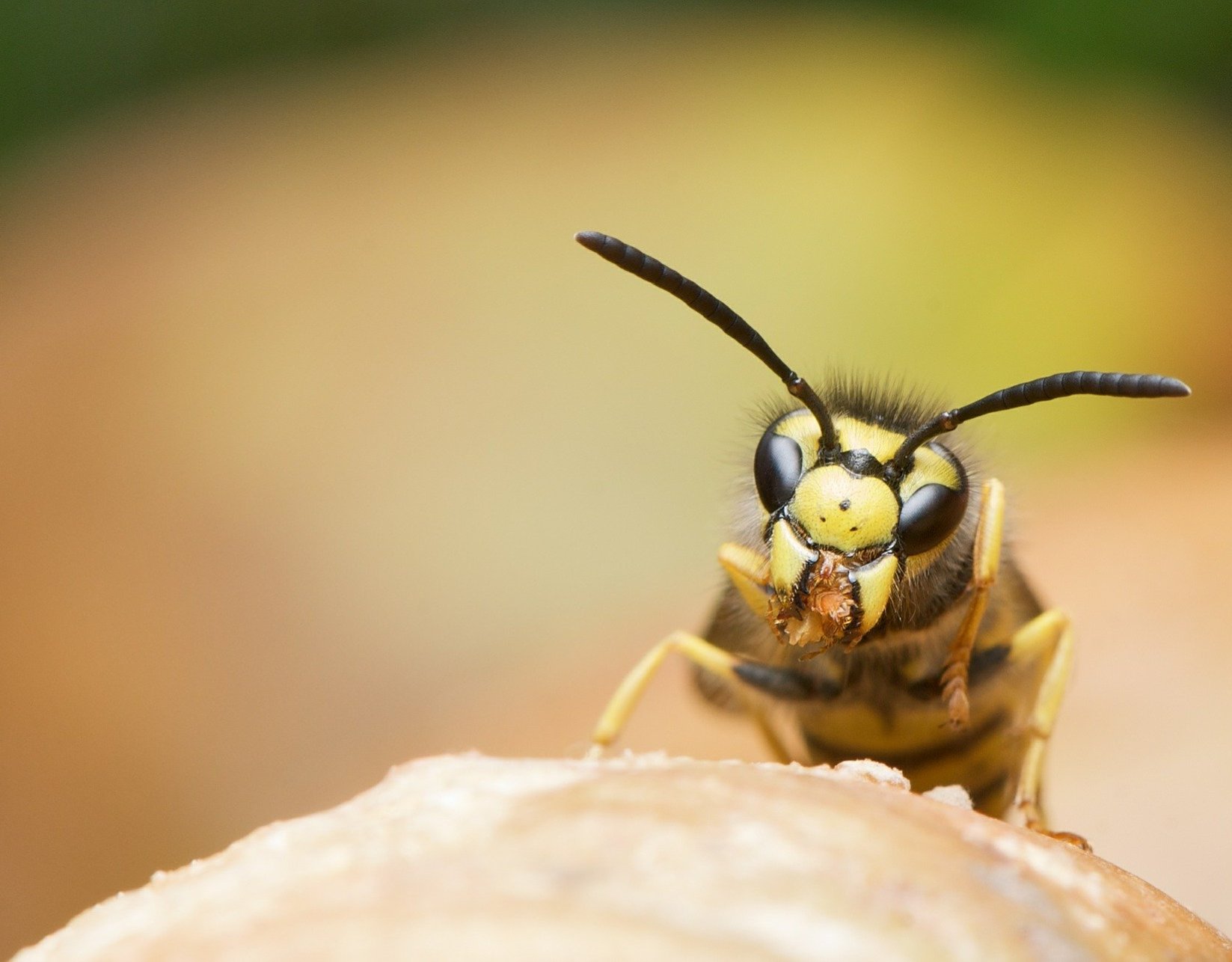 Red wasp
Vespula rufa
An easy going and calm wasp, these will sting only if you really try to provoke them. 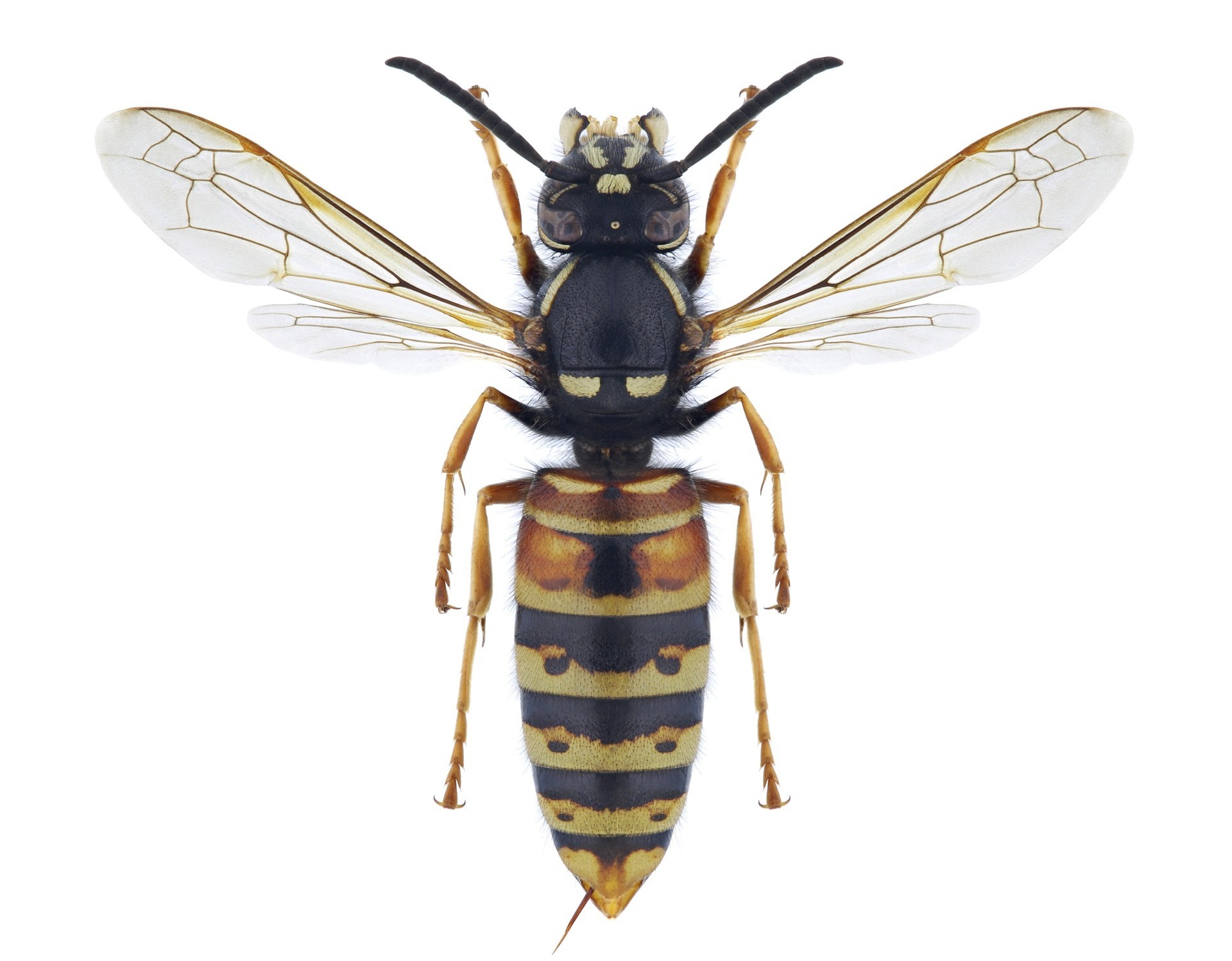 Median wasp
Dolichovespula media
These have been in the UK for just a few years, the most likely to bother you but wave your hands at them and they will fly off. 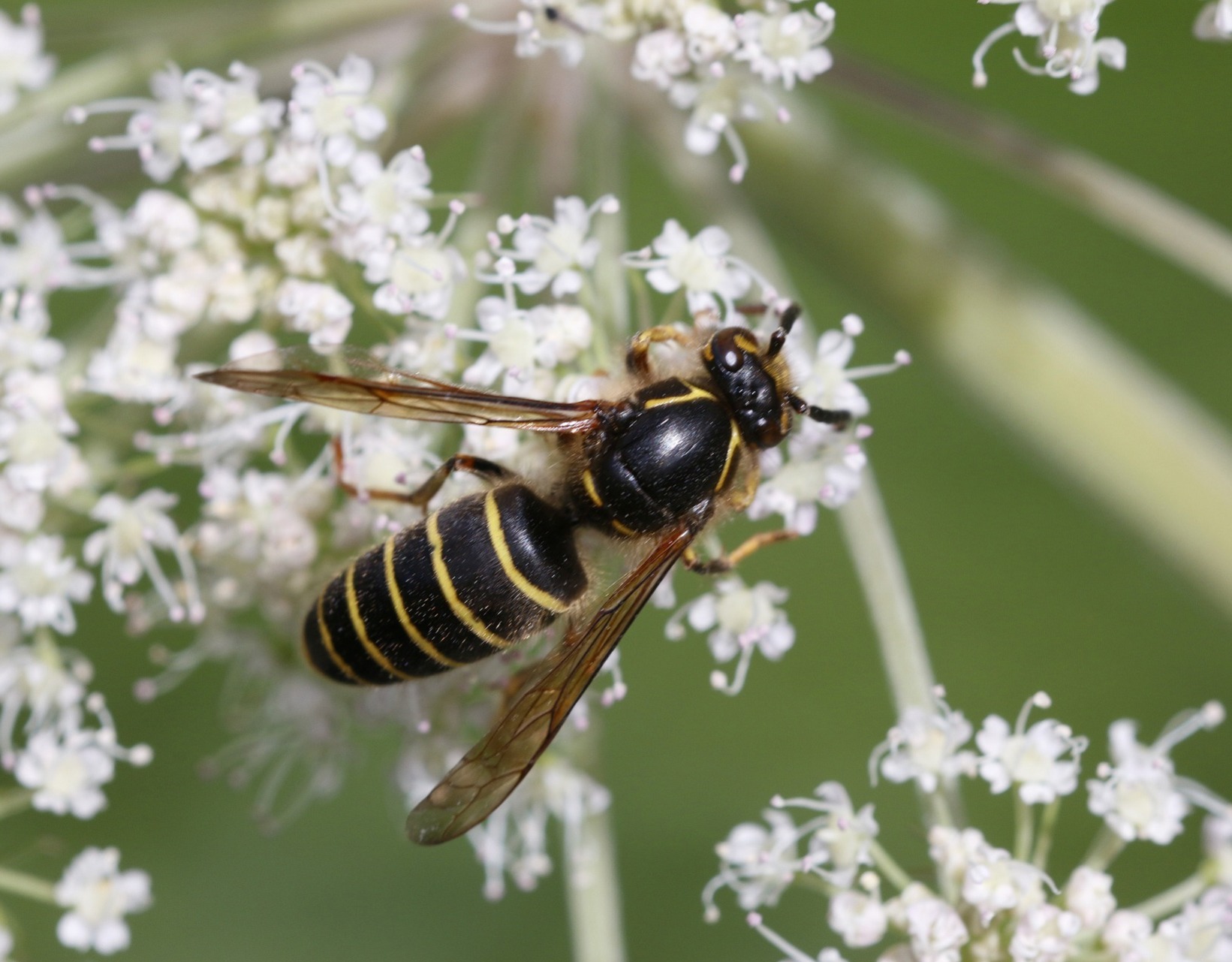 Saxon wasp
Dolichovespula saxonica
These will finish early in the summer and because the nest has no function, the workers will abandon it and wander aimlessly searching for sweet liquids. 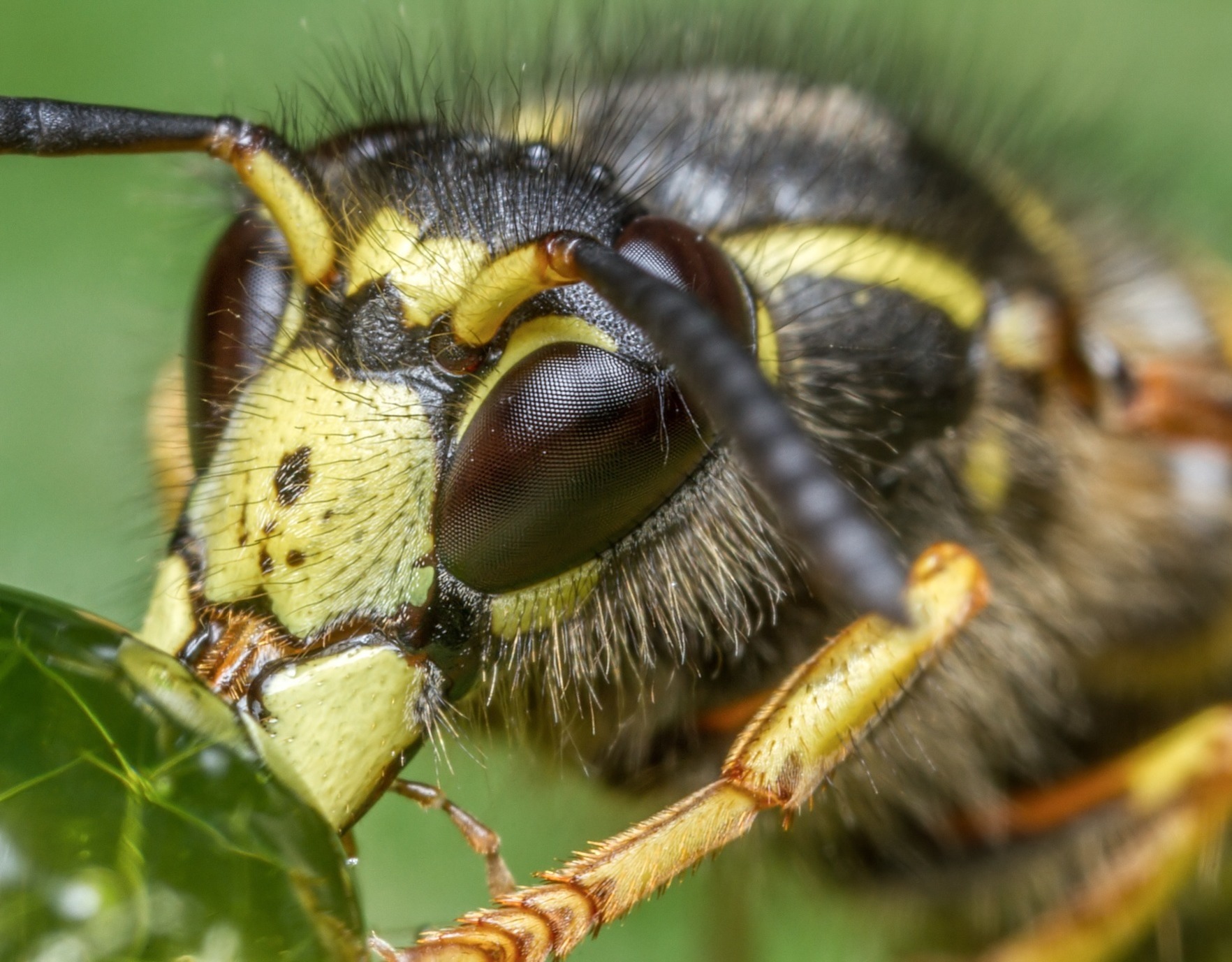 Tree wasp
Dolichovespula sylvestris
Found in woodland and identified with a solid yellow face, these sting but the effect is like a temporary burning sensation.
Click on this text to edit it. 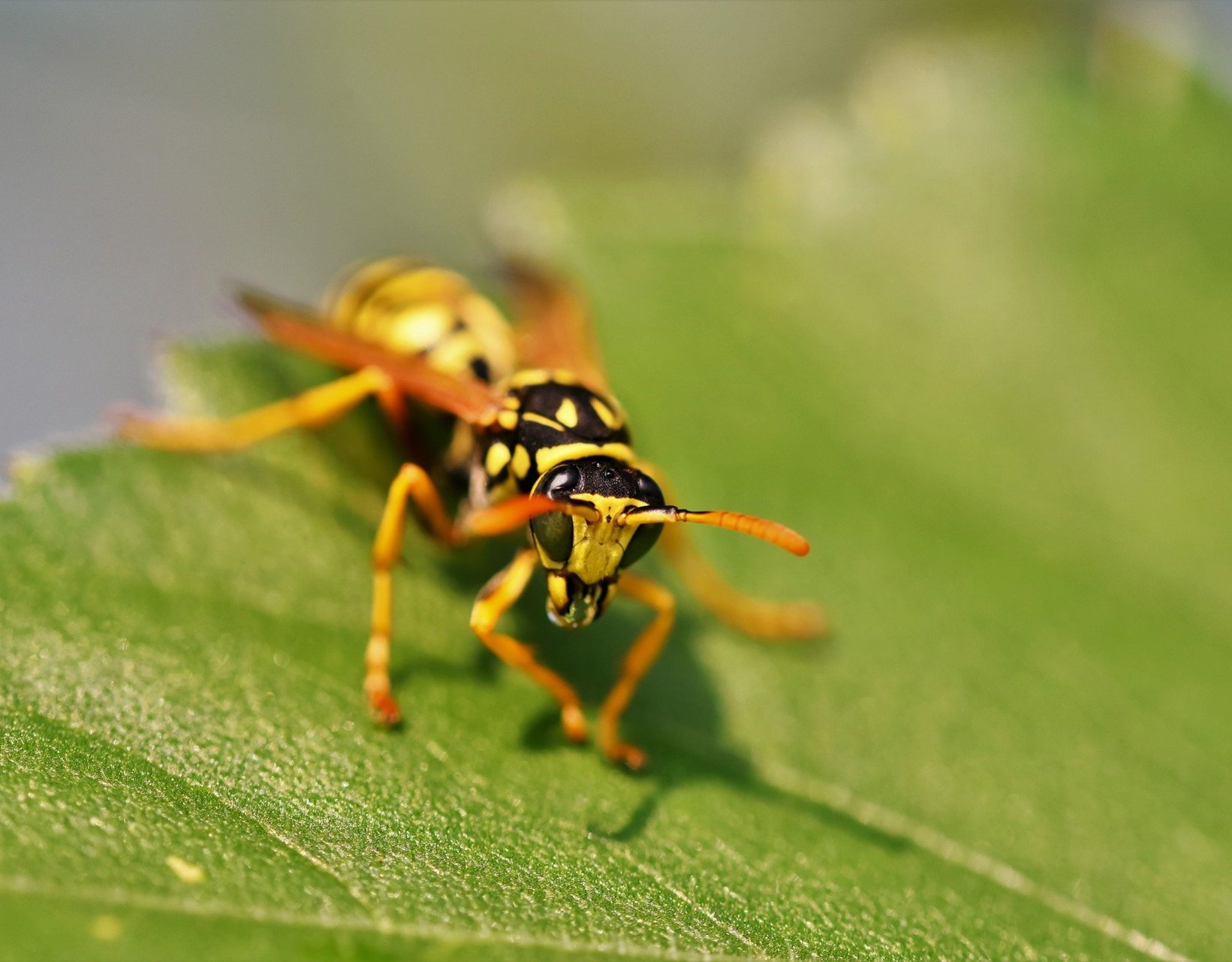 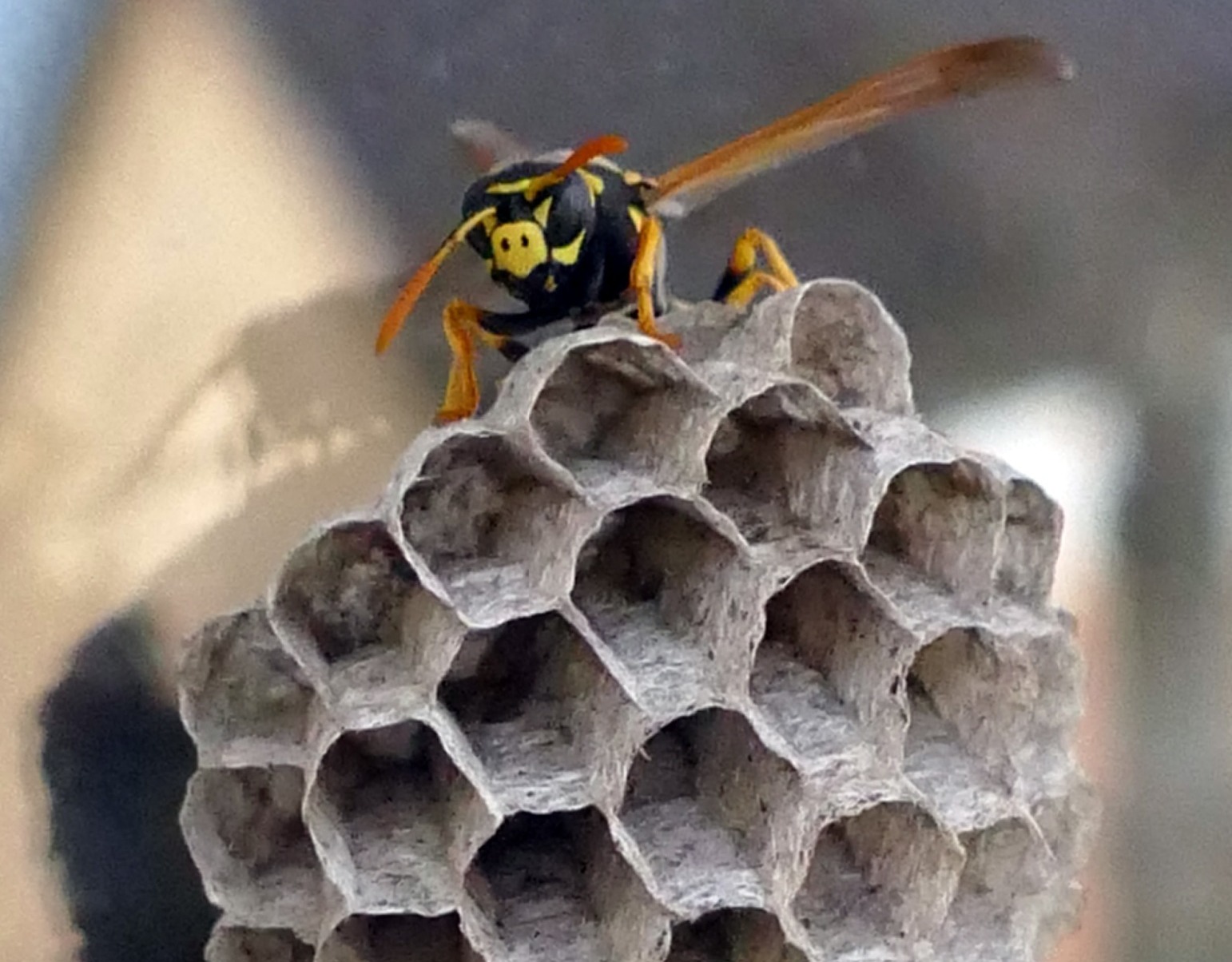 European hornet
Vespa crabro
Our native hornet and something to avoid at all costs, they carry three times as much venom as a common wasp so they pack quite a punch. 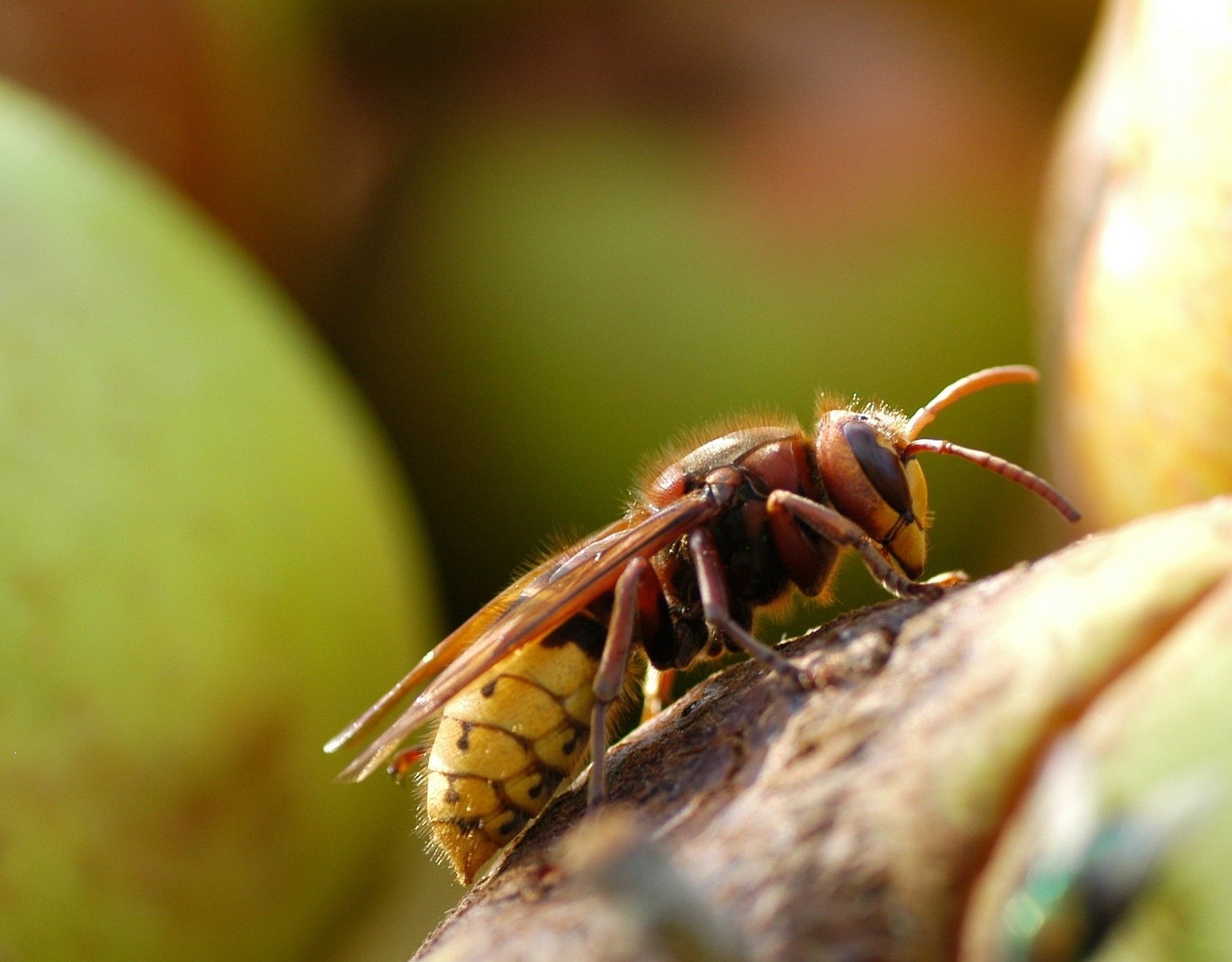 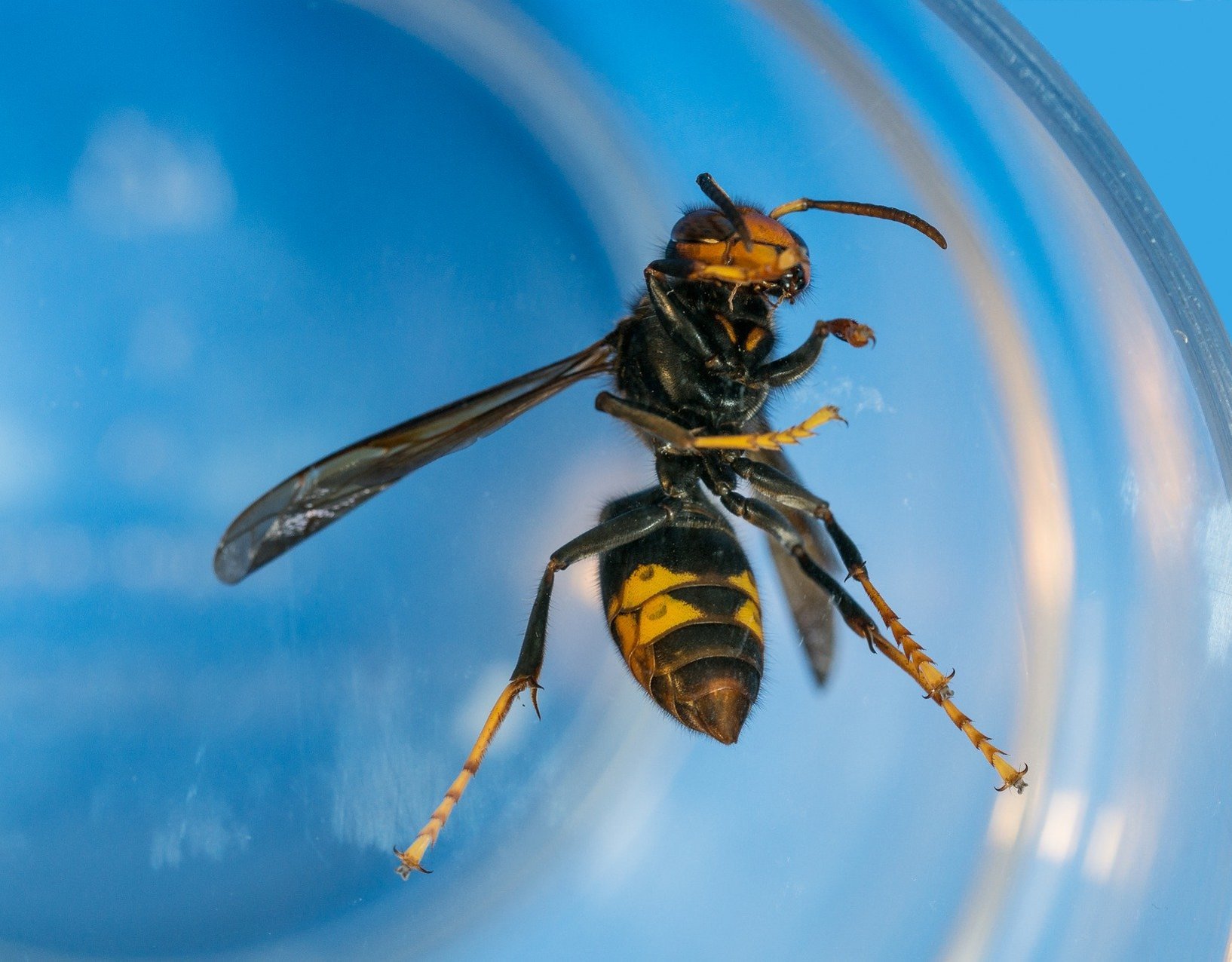 Distinguished by its yellow legs and black abdomen these are highly aggressive and a predator of honey bees, if you think you’ve seen an invasive Asian hornet, you must report it to CEH – The Centre for Ecology & Hydrology on alertnonnative@ceh.ac.uk.
What’s the difference between wasps and bees?
Most people can recognise a bumblebee, a round fuzzy object buzzing around and we are mad for bee’s here at All Aspects Pest Control and we really don’t want to talk about bee’s in terms of pests. There is one species of bumblebee which can be aggressive particularly as it tends to build its nest in bird boxes which can be close to the house – the Tree Bumblebee (Bombus hypnorum), if threatened they will come out and sting and they have a habit of swarming around the entrance to the nest – a large cloud of bee’s is the obvious sign through May and June. These bee’s have recently arrived in the UK so many people aren’t aware of this behaviour; a bumblebee nest is only active for around 2 or 3 months – the Queen and the workers will die off and the new batch of Queens will fly off individually. Bumblebees are important pollinators and so we always advise letting the ‘bee’ and wait for the nest to end.
Honeybees can be mistaken for wasps, around the same size but different in colour – you can tell the difference if you spot the insects in flight as a wasp lets their legs hang while the honeybee tucks them under the body. Honeybees will swarm when the colony runs out of space in its nest site or if the colony simply gets too big. The Queen honeybee releases a pheromone which tells her colony where she is, if the numbers rise and some workers cannot detect her pheromone they will produce a ‘replacement’ meaning that she will leave with her workers.
The swarm season is from April to July with the peak around the middle of May, if you find a swarm just leave it alone – the Queen is not as strong as her colony so she will need to make frequent stops to rest. The workers will have eaten as much of the old nests honey as they could and so they will be stuffed and happy to be left alone – think of Christmas Day after dinner. You just want 10 minutes to close your eyes without anyone pestering you, if possible call a local beekeeper from the list on the British Bee keepers Association website – you will not have to pay for the swarm to be collected, its actually quite valuable!
Click on this link to take you straight to the Swarm information page on their website.
Tagged as: Wasps, bee's and hornets
Share this post: