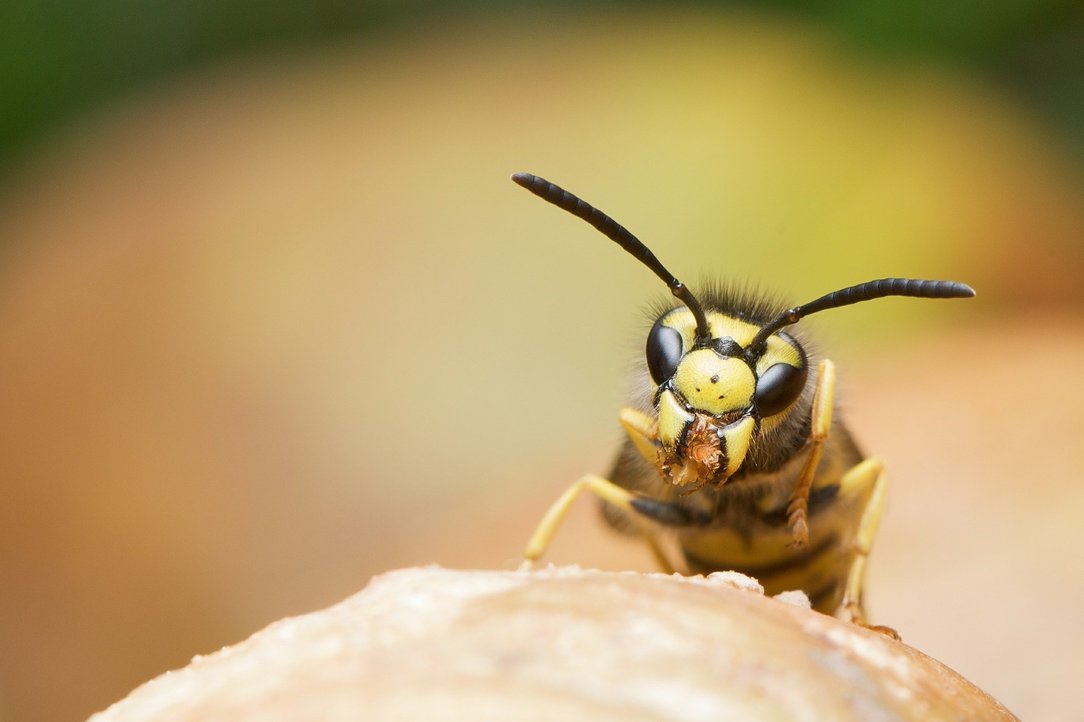 Posted on 12th May 2017 at 18:47
We deal with wasps and hornets as a professional company; these pack a powerful punch and can have serious consequences - read more about the chemicals in a wasps' venom and why its best to leave it to a pest controller.
We guarantee our wasp treatments throughout Reading, Wokingham, Bracknell and Maidenhead - when we say that our customers are our priority : we mean it.
Summers here and as the weather warms up through this month we'll start on what we pesties call "The Wasp Season", which is generally the busiest time of the year in the pest control calender. One of the major drawbacks of being in pest control working around Reading and Wokingham at this time of year is getting stung by a wasp - despite being a professional and having a full array of protective clothing I will get stung from time to time.
I'm often asked by my customers "Does it hurt much?"
The answer for that is yes! The wasp venom (think poison like a snakes venom) is used by the wasp to paralyse its prey - other insects; they'll immobilise their victim before carrying it back to the wasps' nest where sharp mandibles will slice the insect prey up and when mixed with saliva the resulting insect 'porridge' will be fed to the larvae forming within the wasps' nest - nice table manners ... not!
The wasp venom is a seriously powerful cocktail of chemicals and some of these individual chemicals trigger the pain response in our nervous system; the wasp would use this action to drive us away from their nest if we were a predator and therefore the venom is being used as a defensive mechanism - although it doesn't feel like it at the time.
We don't advocate treating honey bees as for one reason their under enough pressure from agricultural pesticides and two, mobile phone signals maybe responsible for disrupting their mapping ability causing more stress. Thirdly, without bees we're all doomed (that's a Dads Army reference by the way) as without bees there will be no pollination and therefore no fruit, no vegetables and no flowers. Honey bees pack a powerful punch with a chemical called melitten which acts to breaks down and kill cells around the venom injection site and when you consider the likely hood of bees stinging en-mass when their colony is threatened this chemical attack poses a serious risk.
Wasps and hornets also load up with their own Weapon of Mass Destruction in the form of actylcholine; this chemical drastically increases the stimulation of our pain receptors meaning that the pain increases rapidly, and beware as hornets carry three times as much of this chemical than wasps.
To make matters worse they also pack in noradrenaline and serotonin; noradrenaline increases blood flow and pressure while the serotonin works as an irritant and contributes to the increasing pain sensation - as if there wasn't enough already?
There are other enzymes and chemicals released and these all aid to the heightening sense of pain and disruption to heart rate and blood pressure; probably one of the most important chemicals used against us is histamine which causes the itching and helps to contribute to the overall pain experience - this is why anti -histamine is so important to combat the effects of wasp and hornet stings.
We deal with wasps and hornets throughout Reading, Wokingham, Bracknell and Maidenhead and our advice is that if you need them treated then its best to call out a professional pest control company that guarantee's their treatments so you'll only pay once but be sure to get your wasp nest sorted.
Tagged as: Wasps, bee's and hornets
Share this post: