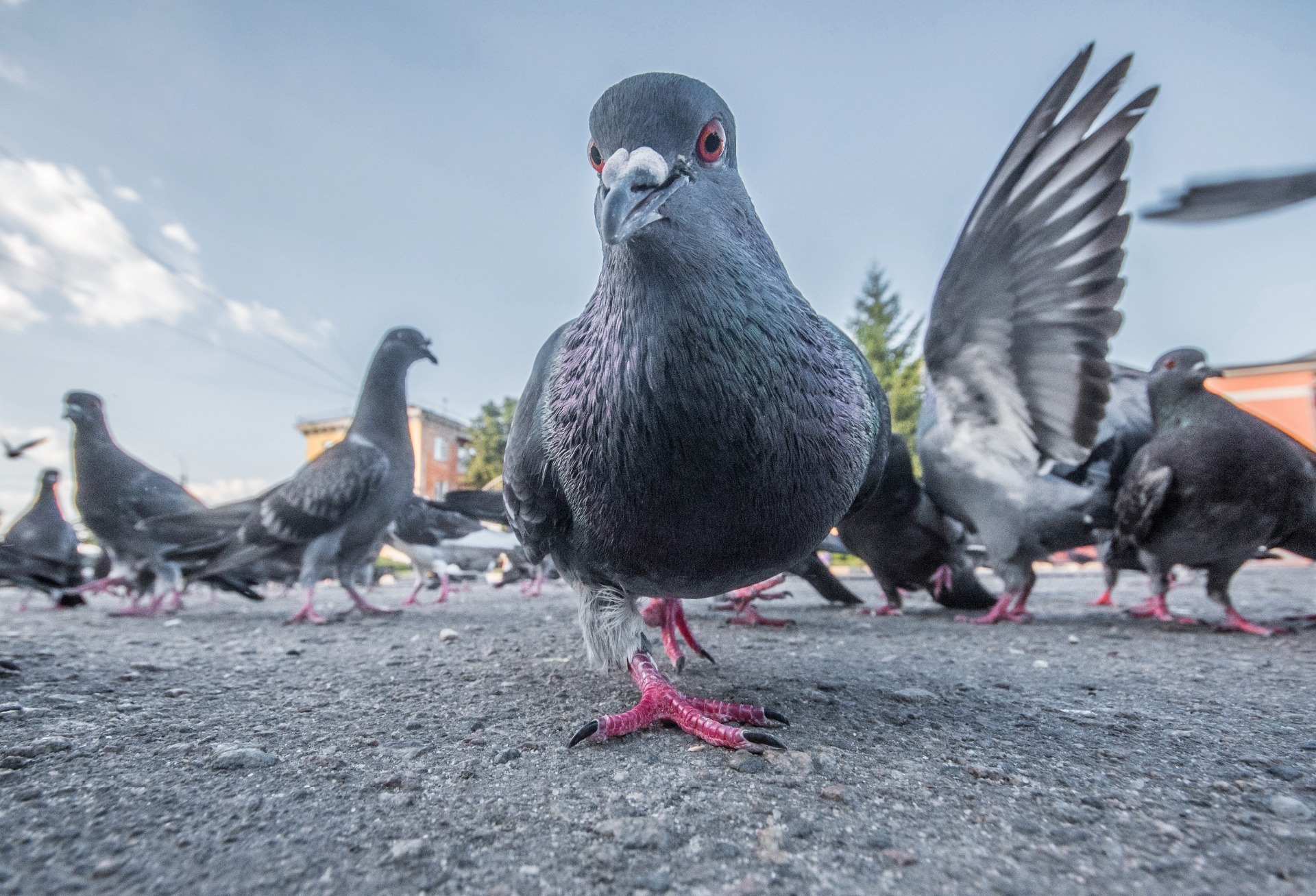 The Coopers Arms in Reading

Cleaning up at the Coopers Arms

A big part of our pest control service is delivering pigeon control options, usually this consists of installing netting and spiking but there is one aspect of dealing with birds which we get a lot of demand for and that’s cleaning up the mess left behind a pigeon infestation.
Pigeons are large birds with a rapacious appetite; they are avian scavengers and similar in the pest status to rats. These birds will eat anything they can get all day long, and the reason for this is that given sufficient food they will breed all year long, with the final piece of the puzzle being the need for somewhere dry and sheltered to nest in.
Given a plentiful supply of food, drinking water and shelter, feral pigeons are probably the worst pest we deal with.
The first time I ever went to the Coopers Arms was with a load of friends on what was my ‘send-off’ pub crawl of Reading before I left at the tender age of 17 to join the Royal Air Force. OK, it wasn’t legal to drink in pubs at that age, we’d all been big for our age and drinking in the towns pubs since we were 14. The Admiral in West Street was our favourite hang out and what a pub it was!
We went into the Coopers expecting a drink only to find a huge row between the bar man and one of the punters and an outright refusal to serve anymore drinks until an apology had been delivered – which was obviously not forthcoming, so we left in search of beer elsewhere.
Fast forward 28 years and I’m back in the Coopers but this time working inside the building; the pub had been empty for well over ten years and due to the oversight of not securing the structure properly, rain water, the homeless and the towns feral pigeon population had all been inside during that time. This is not the first time I’ve worked at the Coopers Arms. 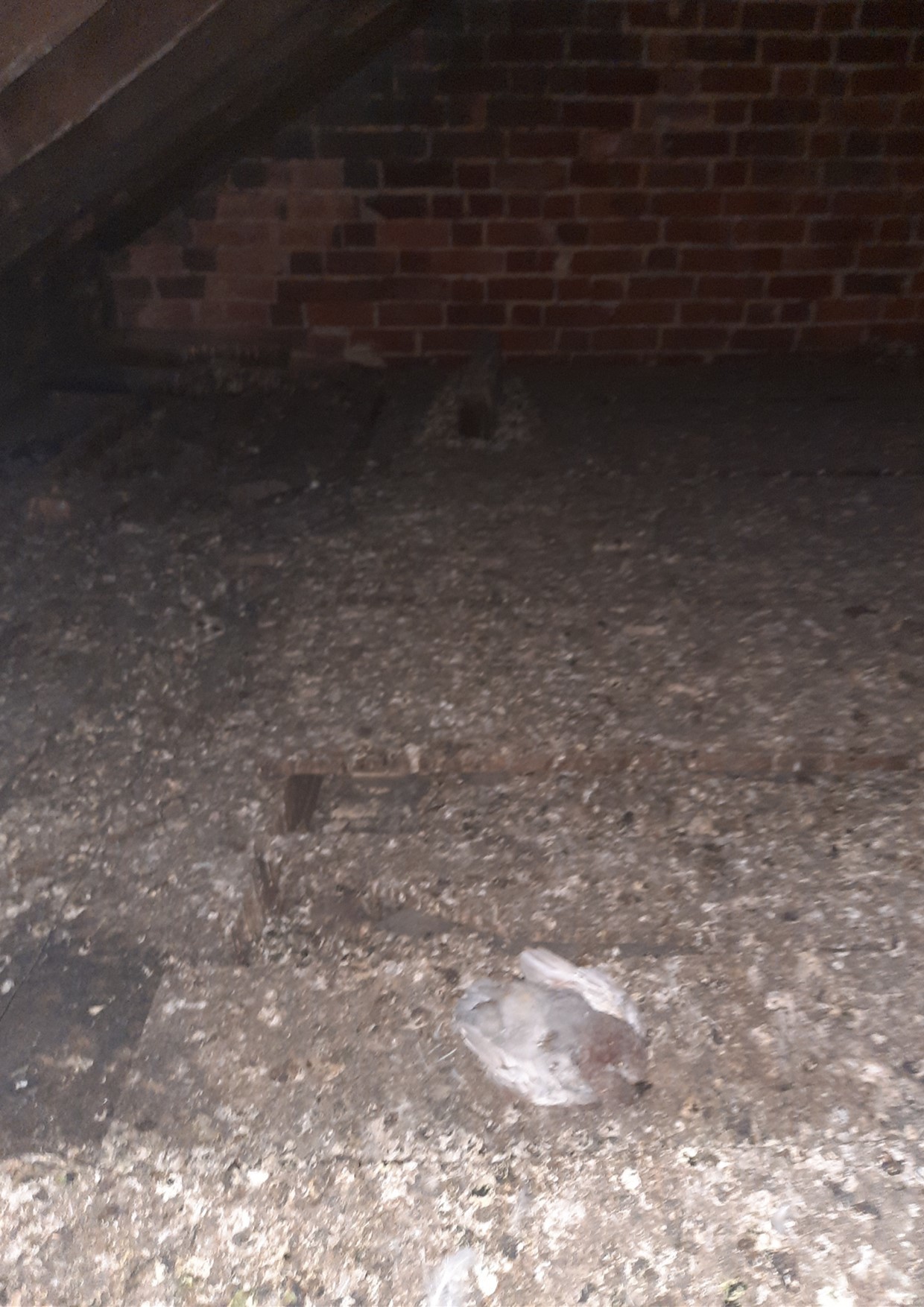 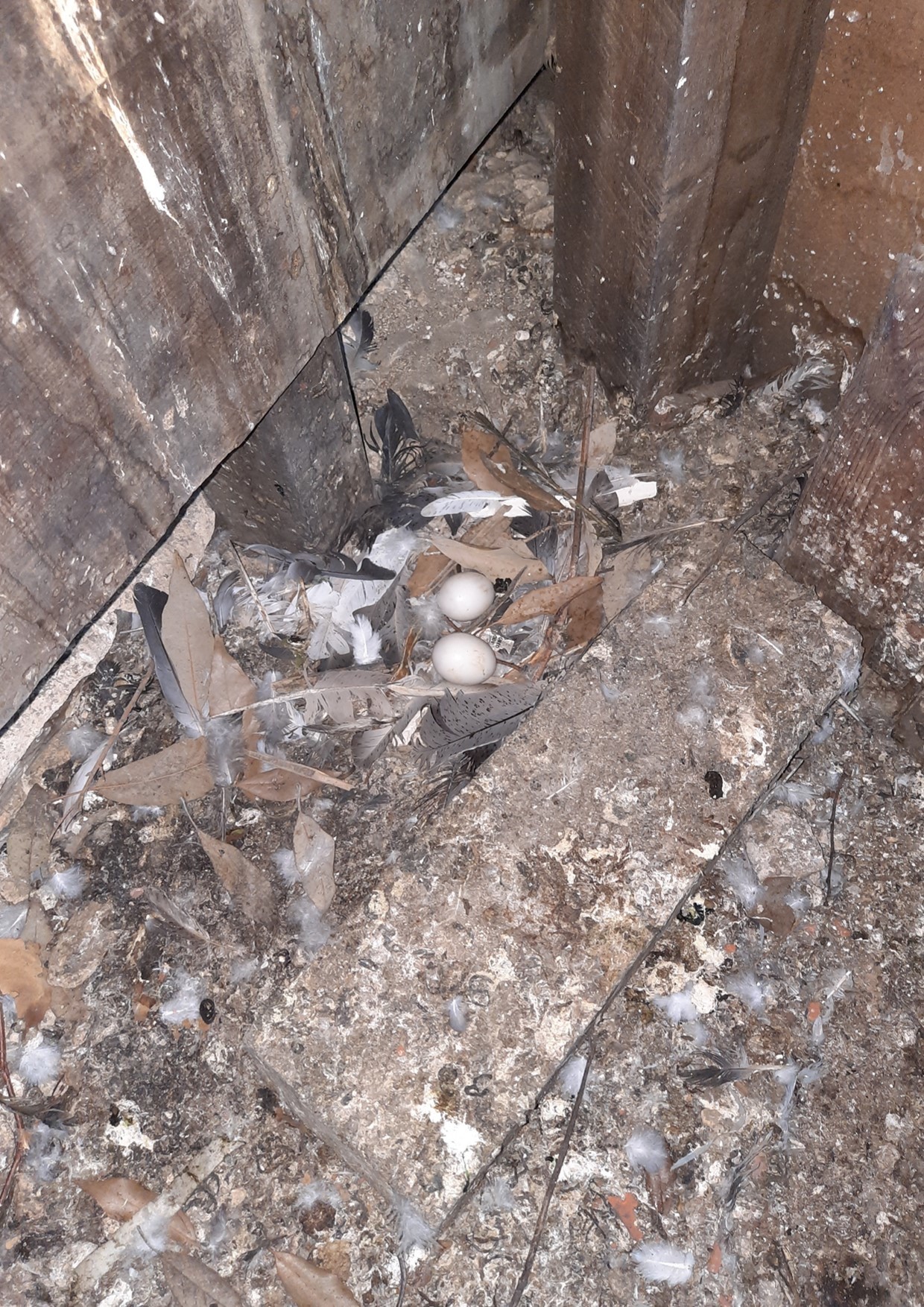 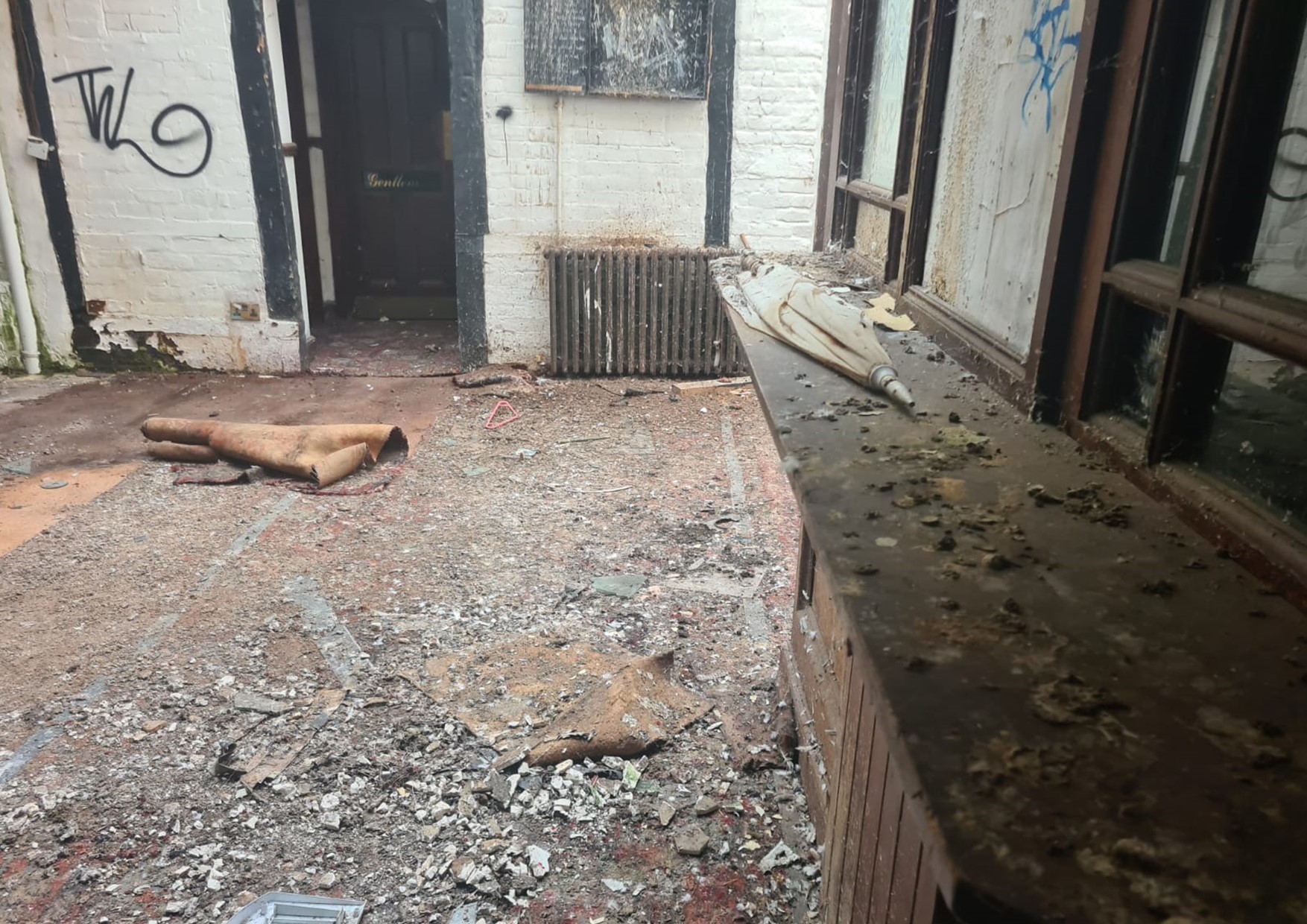 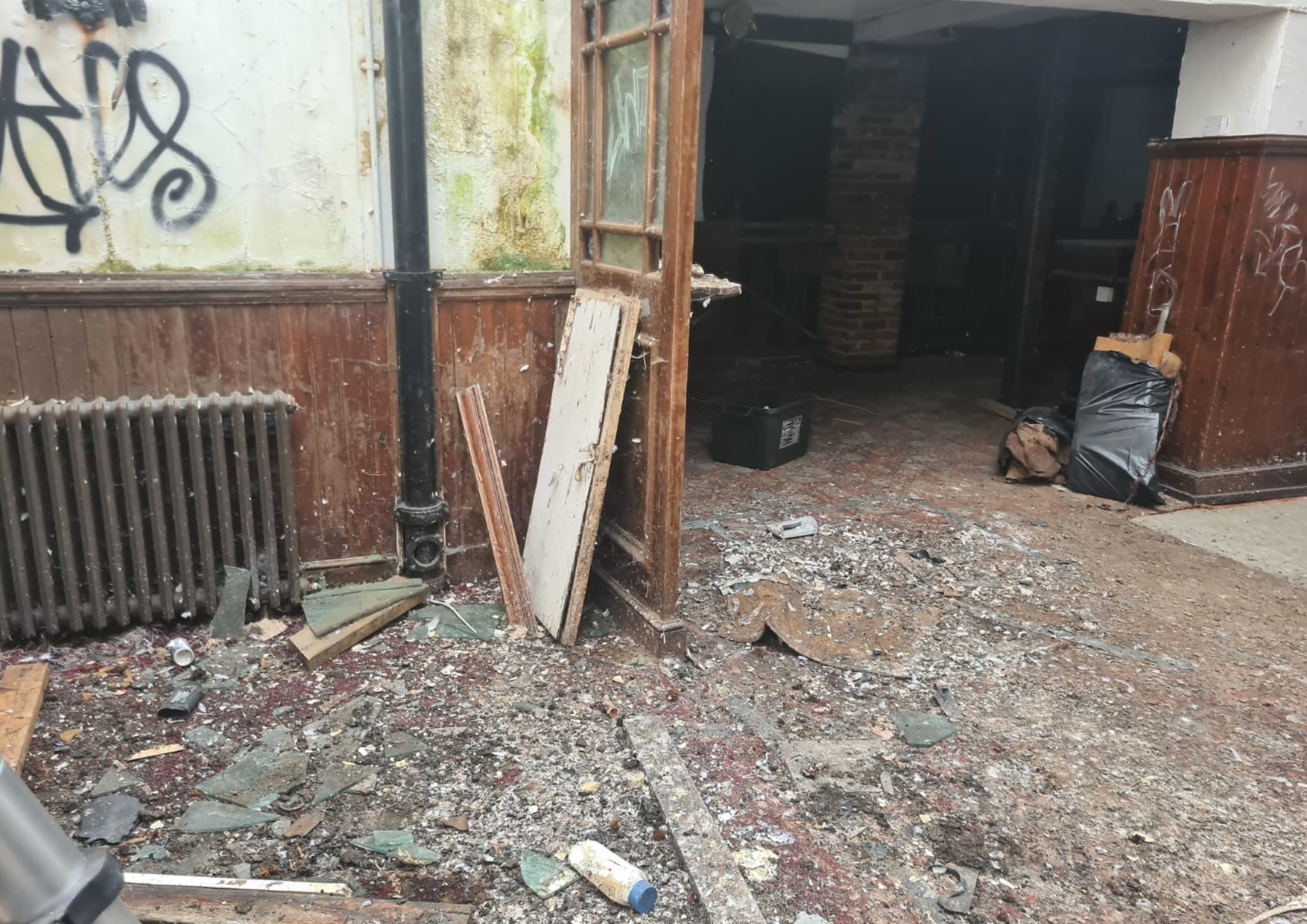 Being big eaters means that pigeons produce a lot of poo with each adult bird depositing around a kilogram of guano every month. The scene inside the Coopers Arms was one where four floors of the building had guano deposits lying on the floors, windowsills and exposed wooden beams. The deposits ranged from lightly covered rooms to areas where the depth of pigeon droppings could be measured in inches.
Rooms, corridors, and stairwells were all encrusted in pigeon muck and our job was to go in and clear this mess up. The building was once the home of a wealthy merchant and although turned into a pub, many of the internal construction features are still visible. On the top floor there are no walls as the lathe and plaster has been removed to lay open the bones of the building.
Going down through the floors which are uncarpeted there is a hole cut through the floor in one of the corridors; I did that about 12 years ago when I was a firefighter stationed at Caversham Road Fire Station and we were called out to extinguish an electrical fire in a lighting unit directly under the boards. 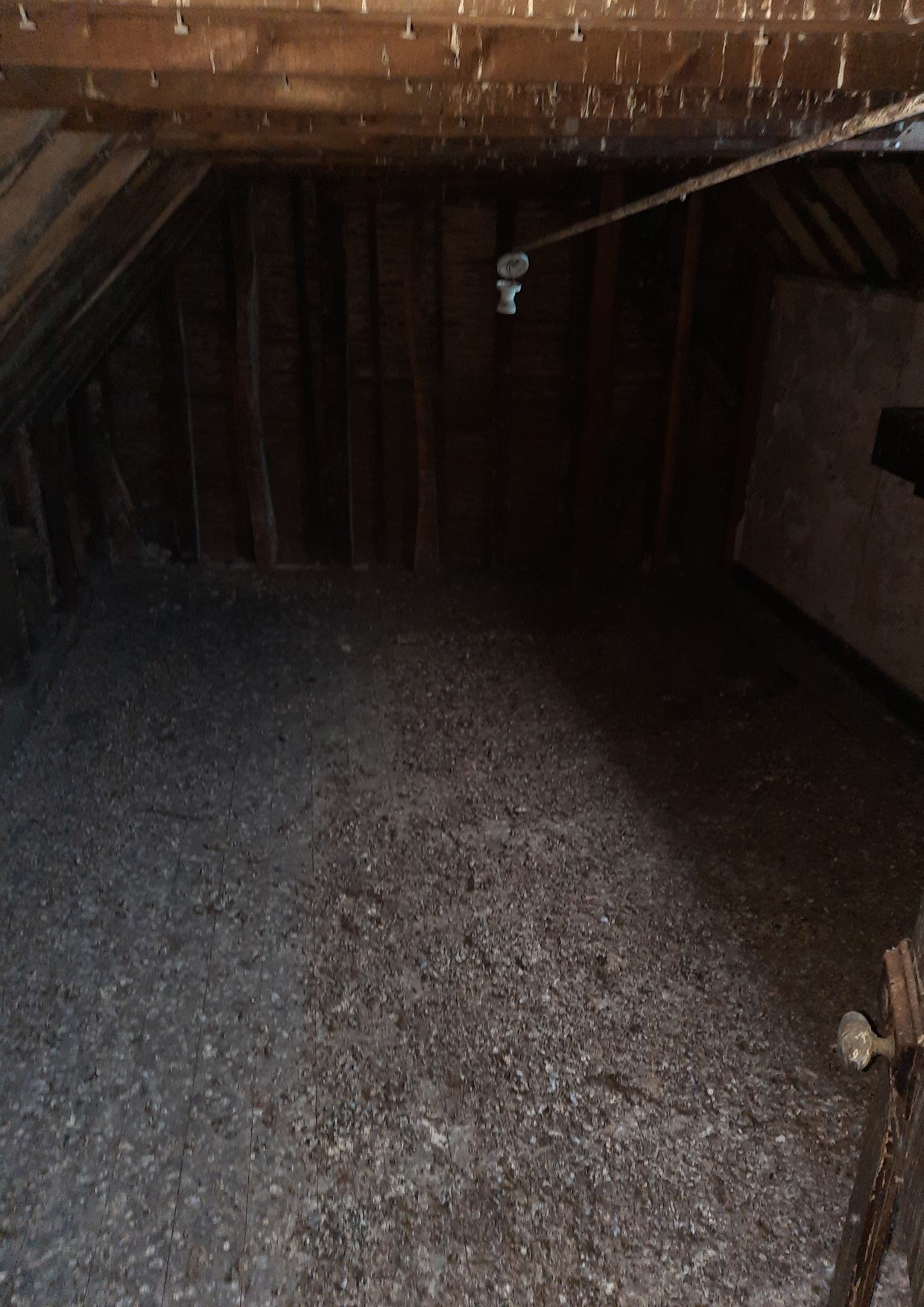 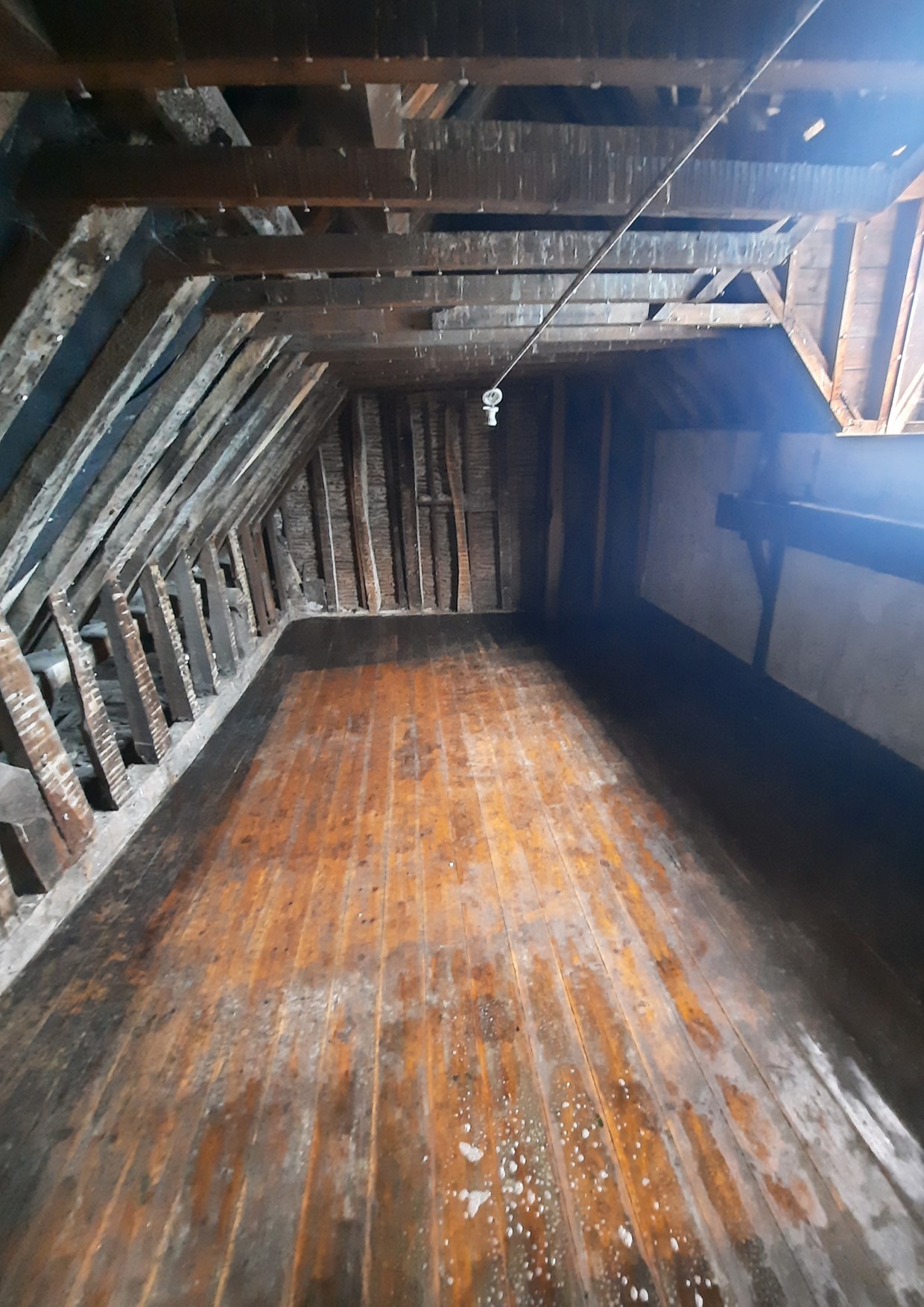 The task of cleaning up years of pigeon guano

We had decided on four people working over four days to get the job done and we started in the worst area, which was the top floor, this area was just a solid mat of dried out bird poo and getting this done would break the back of the job. From here we would work our way down through the floors until we reached the ground floor.
The ground floor has a huge glass lantern light which is a fancy way of saying a pitched glass roof flooding the interior with daylight. We still had pigeons getting in and there were around a dozen or so birds that we had to shoo out before we could start cleaning, in fact the bar area was worse than we thought as there were delays caused by the presence of needles which had to be cleared away in accordance with the builders own risk assessment.
The delay gave us time to reflect on who owned the building back in the 15th Century; there is an ornate wooden frieze covering one wall and the marking on it either suggest a military man or someone involved in supply uniforms and armaments? 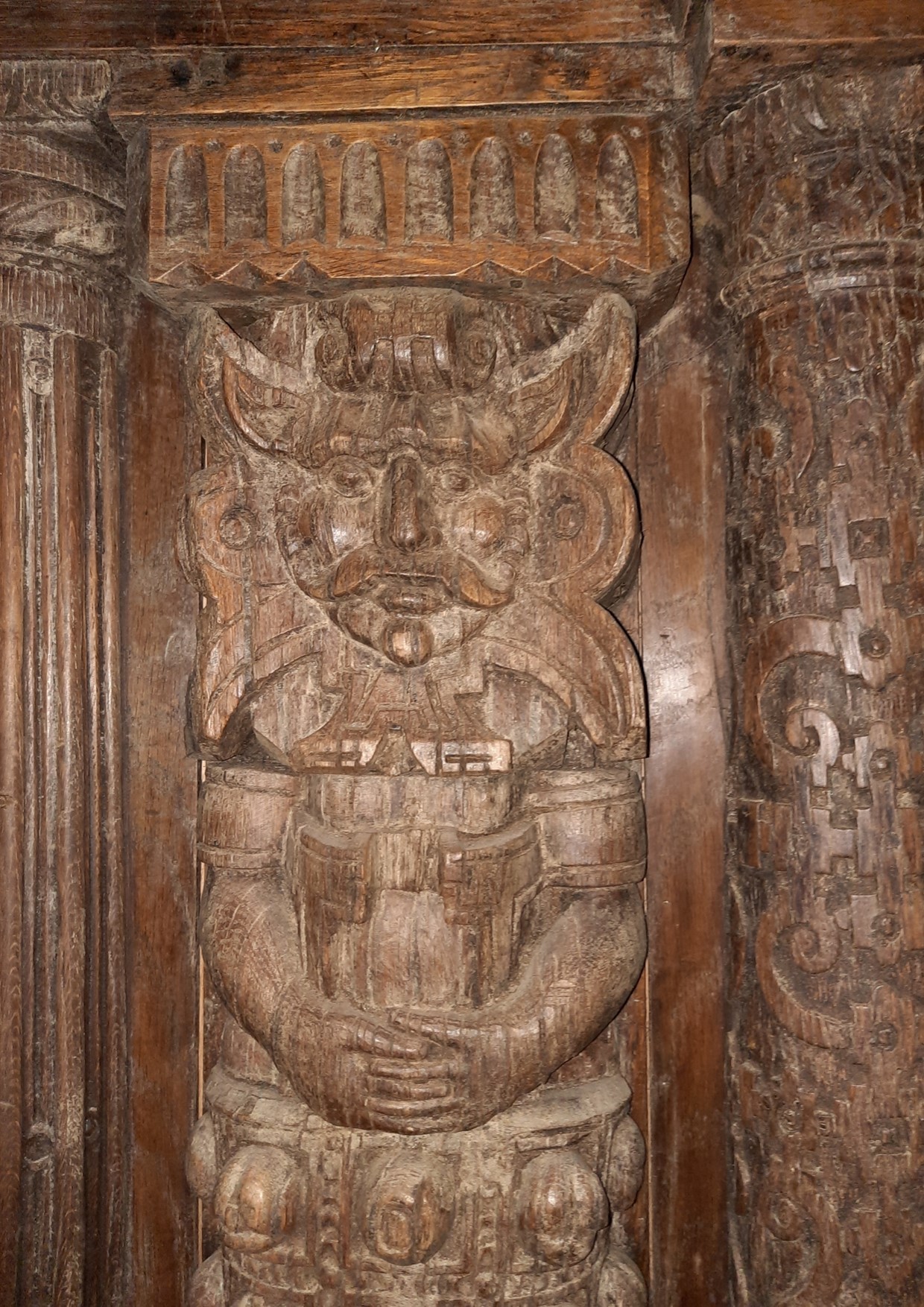 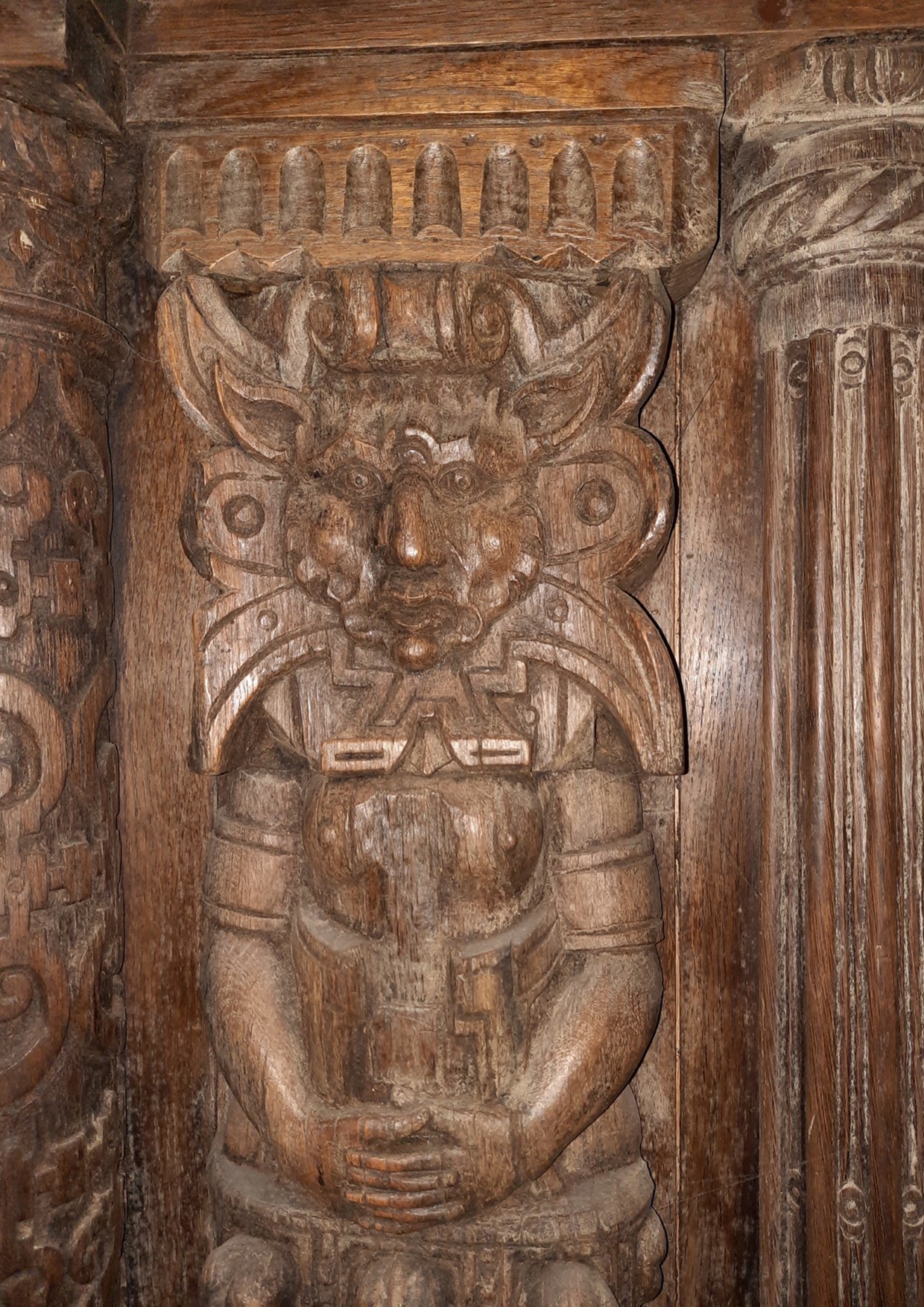 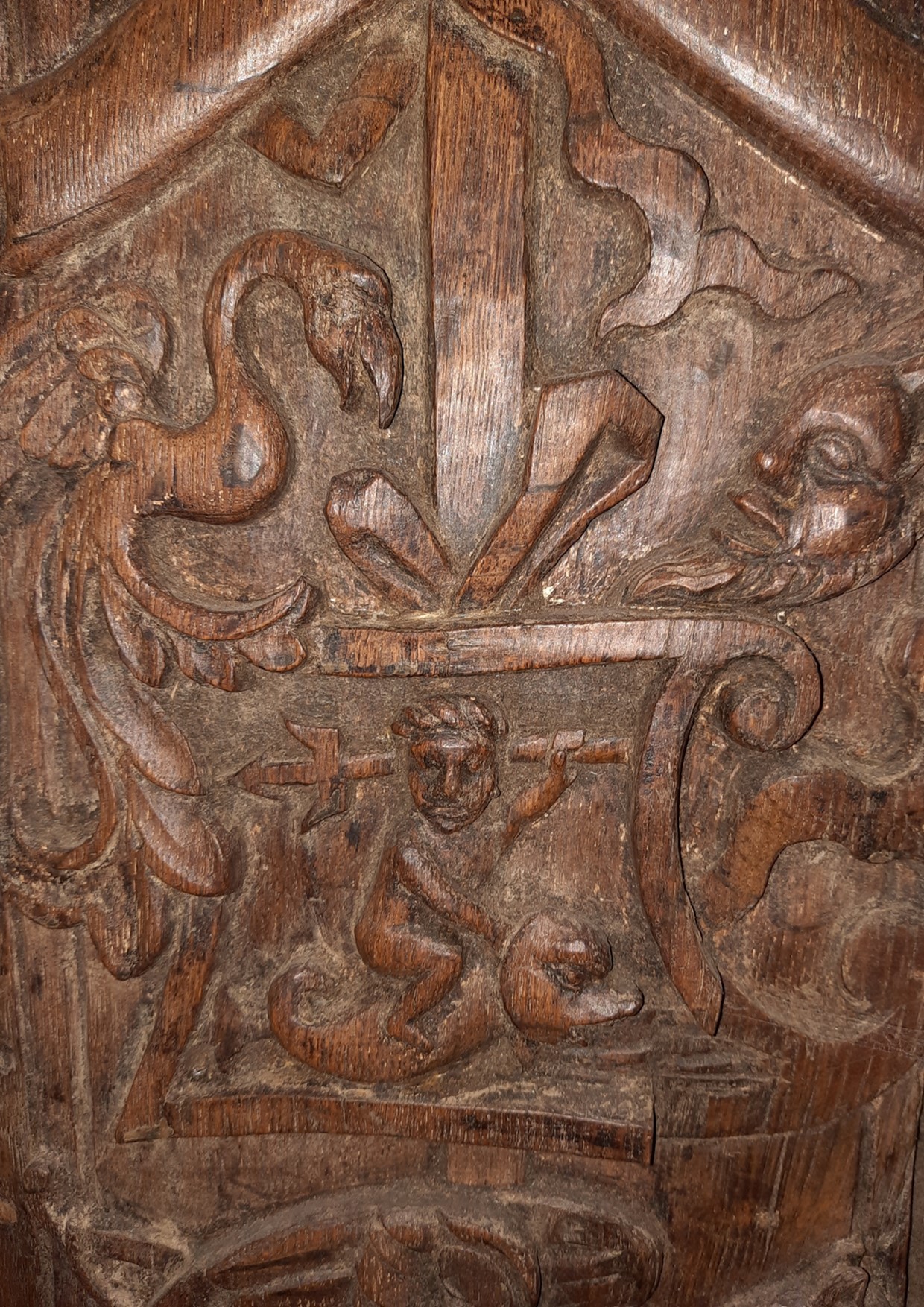 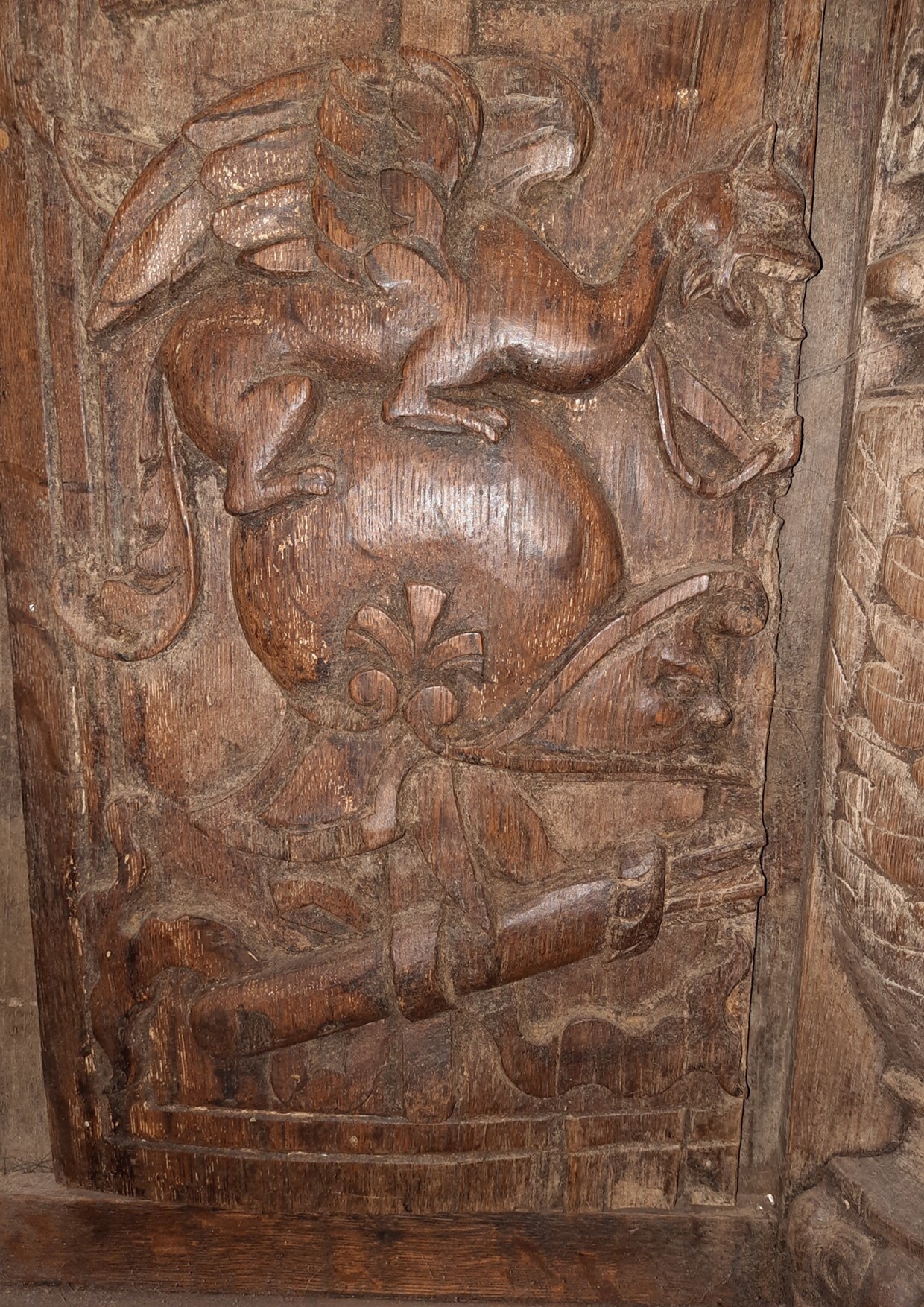 Obviously at some time the Coopers Arms had had a rat problem; we found several dried out carcases and this little fella.

The future of the Coopers Arms

Our reason for cleaning up the pigeon muck is to allow workmen in and work in a safe and hygienic environment, English Heritage also need to assess the building to check the condition and place restrictions on future redevelopment.
The front is Grade 2 listed and will be kept as part of the new development into a four-star hotel; the development site also includes the Bristol and West section which runs back from Friar Street to Sainsburys on Broad Street. 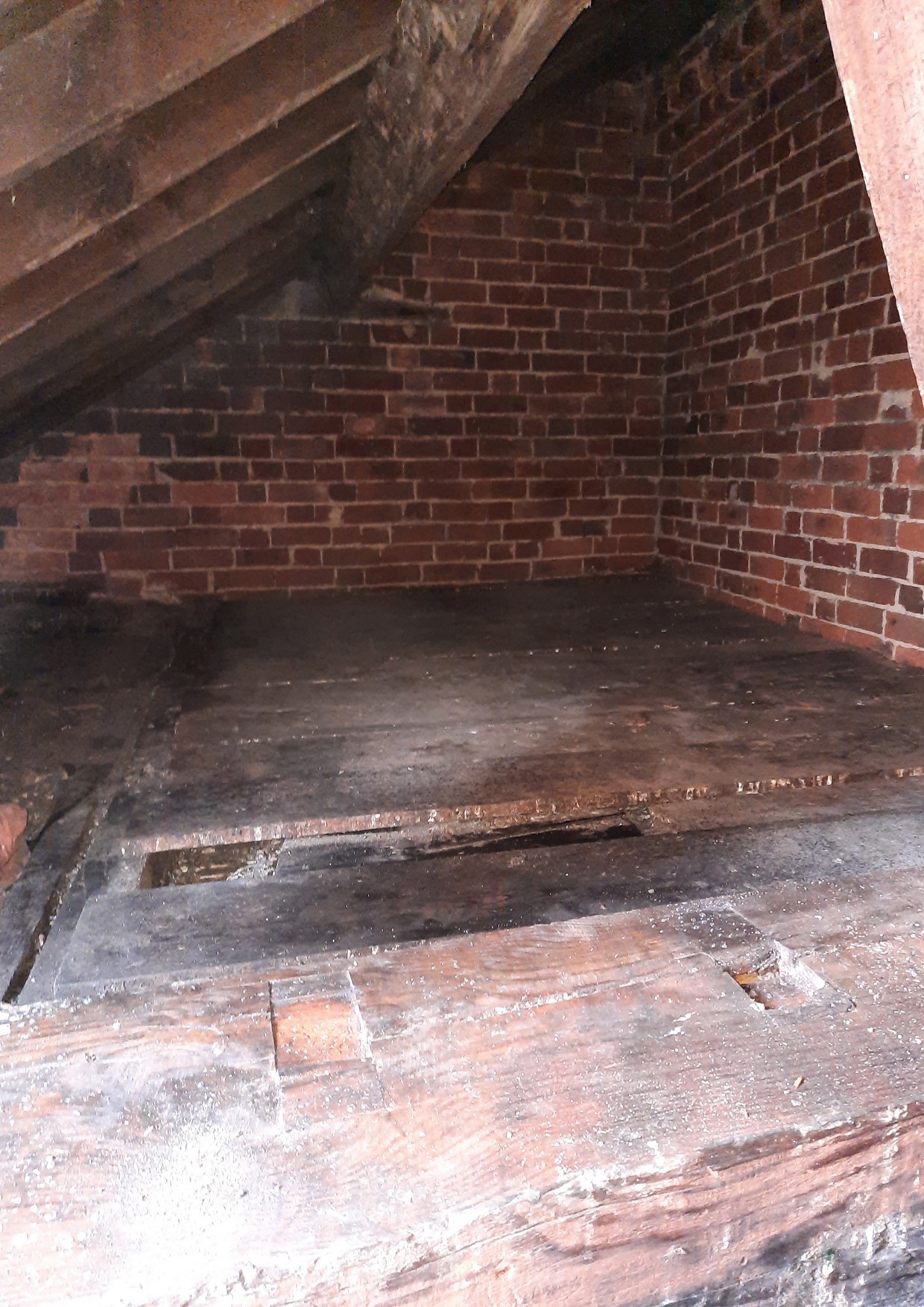 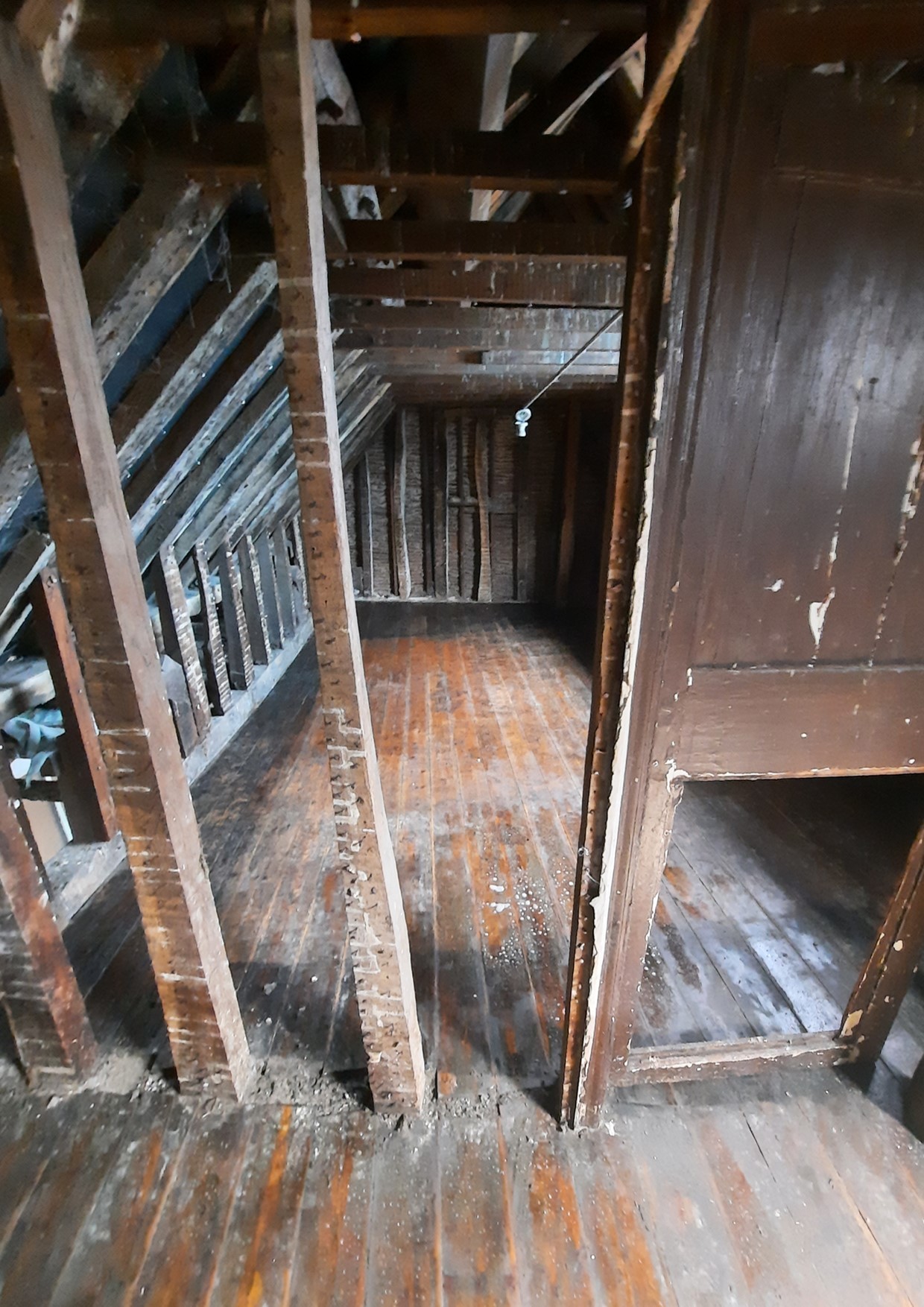 Pigeon control services in Reading from a local company

We provide a wide range of pigeon control services from cleaning up the mess left behind to installing high quality deterrents like netting and spiking; if you have a pigeon problem in Reading or right across the south East of England then get in touch as we offer a free site survey to discuss the extent of the problem and what the best way of getting control is.
Tagged as: Bird control
Share this post: